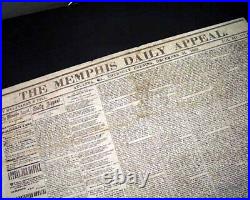 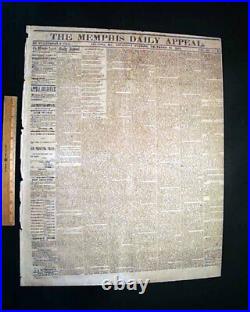 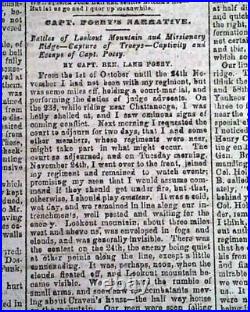 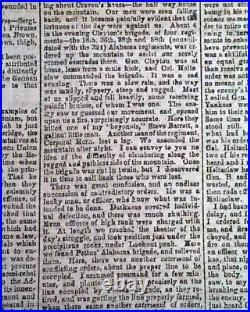 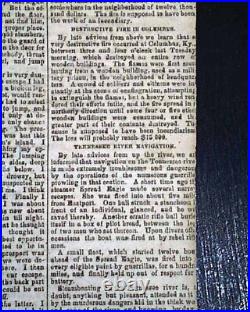 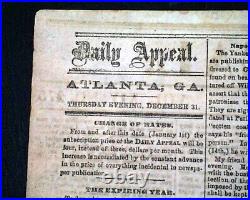 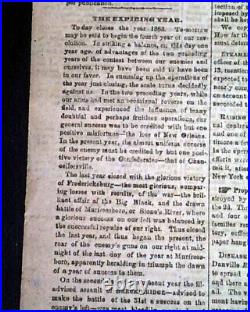 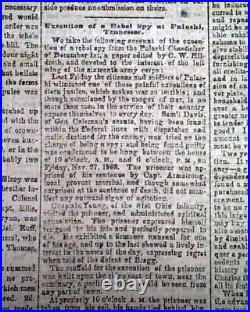 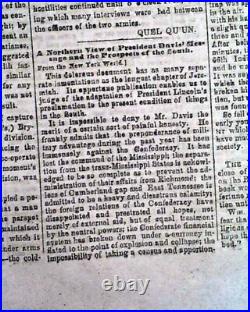 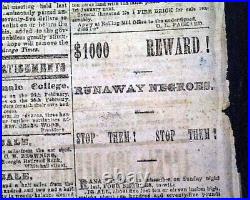 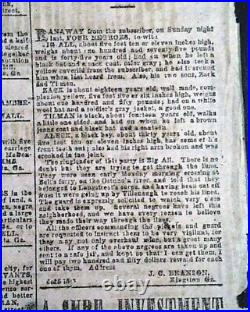 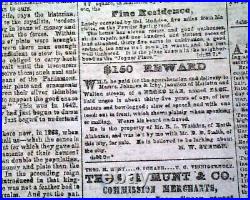 VERY Rare Confederate Memphis Civil War 1863 Newspaper w/ Publisher on the Run. (Note: additional images are located below the description). Offered is an original, historic, & collectible old newspaper: THE MEMPHIS DAILY APPEAL, Atlanta, Georgia, December 31, 1863. If the title and city of publication seem to be in conflict, they are not. This newspaper had a fascinating history during the Civil War. Memphis was a Confederate stronghold up through the Battle of Memphis on June 6, 1862, at which time the Yankees moved in and it became a Yankee city.

Being a strong voice for the Confederacy, the "Memphis Appeal" newspaper would not continue under Yankee control. On June 6, 1862, the presses and plates were loaded into a boxcar and moved to Grenada, Mississippi, where it published for some time.

The Appeal later journeyed to Jackson, Mississippi, Meridian, Mississippi, Atlanta, Georgia, and finally Montgomery, Alabama, where the plates were destroyed on April 6, 1865, only days before the Confederate surrender, halting publication of what had been one of the major papers serving the Southern cause. So this one newspaper published in six different Confederate cities during the Civil War. The front page includes: Capt. Posey's Narrative" with subheads: "Battles of Lookout Mountain and Missionary Ridge--Capture of Troops--Captivity and Escape of Capt. Posey which is by Capt.

This report is exceedingly detailed and takes close to five columns. The back page has an editorial headed: "The Expiring Year" which reflects upon the efforts of the year 1863.

Also: "Our Army Correspondence which takes close to two columns; "A Northern View of President Davis' Message & the Prospects of the South" "Execution of a Rebel Spy at Pulaski, Tennessee and other smaller items. Complete as a single sheet newspaper of folio size, close trimmed at the bottom half of the right margin causes some loss to the ftpg. Only but not to any mentioned items. A rare opportunity for a Confederate newspaper printed in Atlanta Georgia, its fifth city of publication during the Civil War.

Please Note: All of our offerings are 100% authentic! We do not offer reprints or reproductions of any kind. They are guaranteed to be original!

For this specific item, A U. The per-item additional cost for folders, portfolios, and presentation cases vary. We will still provide tracking and insure them at our expense. Please check with your country's.

We have been dealers in rare newspapers for over 47 years, serve as consultants to multiple museums, and are members of the American Antiquarian Society. Timothy Hughes Rare Newspapers P.

Desiring to conduct ourselves honorably in all things. Were it left to me to decide whether we should have a government without newspapers, or newspapers without a government, I should not hesitate a moment to prefer the latter. This item is in the category "Collectibles\Militaria\Civil War (1861-65)\Original Period Items\Newspapers".

The seller is "timhu" and is located in this country: US. This item can be shipped worldwide.