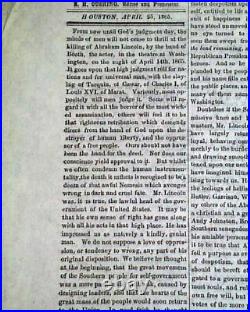 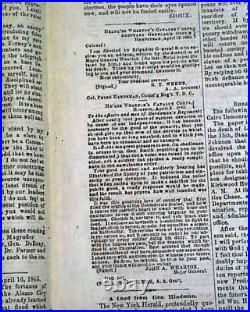 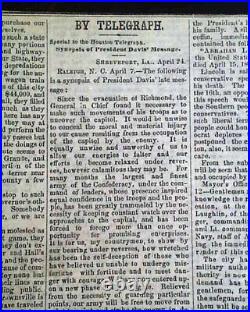 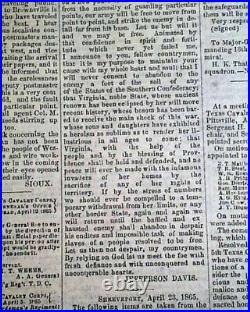 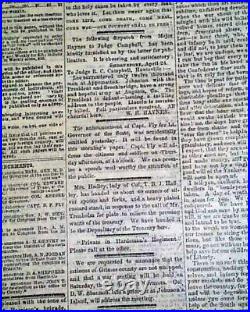 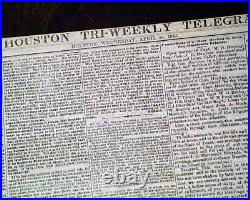 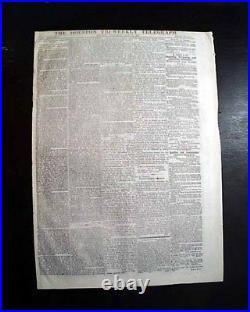 Very Rare CONFEDERATE Houston TX Texas w/ Jeff. Davis Civil War 1865 Newspaper. (Note: additional images are located below the description). Shown is an original & historic old newspaper, offered to enhance your collectible interest: HOUSTON TRI-WEEKLY TELEGRAPH, Texas, April 26, 1865. Very rare issue from the Southwest Confederacy. Page 3 contains a synopsis of President Davis' message in which he talks about the evacuation of Richmond and reaffirms his commitment to the Confederacy, reading in part.

Again & again we will return until the baffled & exhausted enemy shall abandon in despair his endless & impossible task of making slaves of a people resolved to be free... And more, signed in type: Jefferson Davis.

Page 2 begins with a fascinating editorial concerning the Lincoln assassination, beginning. From ow until God's judgment day the minds of men will not cease to thrill at the killing of Abraham Lincoln by the hand of Booth, the actor, in the theatre at Washington on the night of April 14th, 1865... Page 2 also includes a letter from Gen.

Wharton to the officers of Col. After nearly 4 years of earnest devotion to the cause of our independence, it has become necessary for the good of the country that you should give up that arm of the service to which you have been so long attached... Much more on the war as well.

Texas was one of the last strongholds of the Confederacy. In April the insurrection was declared over everywhere except Texas. It was not until August 20 that President Johnson would proclaim the insurrection ended in Texas.

Four pages, nearly close-trimmed at the top but no text loss, two quite small worm holes, generally very nice, clean condition. Please Note: All of our offerings are 100% authentic! We do not offer reprints or reproductions of any kind. They are guaranteed to be original!

For this specific item, A U. The per-item additional cost for folders, portfolios, and presentation cases vary. We will still provide tracking and insure them at our expense. Please check with your country's. We have been dealers in rare newspapers for over 43 years, serve as consultants to multiple museums, and are members of the American Antiquarian Society.

Timothy Hughes Rare Newspapers P. Desiring to conduct ourselves honorably in all things. Were it left to me to decide whether we should have a government without newspapers, or newspapers without a government, I should not hesitate a moment to prefer the latter. The item "Very Rare CONFEDERATE Houston TX Texas with Jeff.

Davis Civil War 1865 Newspaper" is in sale since Tuesday, April 17, 2018. This item is in the category "Collectibles\Militaria\Civil War (1861-65)\Original Period Items\Other Civil War Original Items". The seller is "timhu" and is located in Williamsport, Pennsylvania. This item can be shipped worldwide.