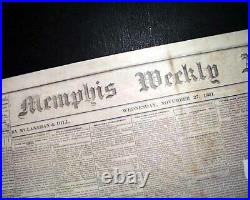 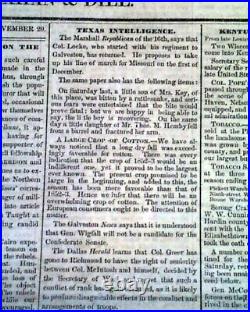 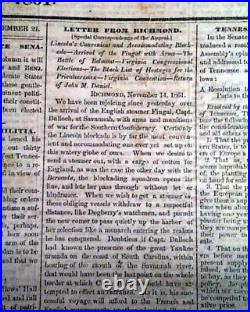 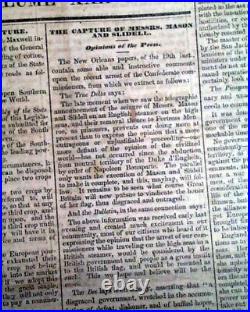 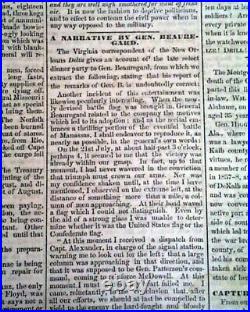 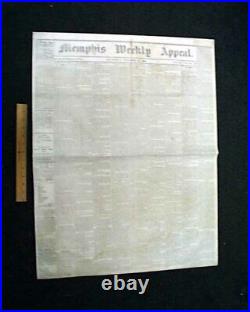 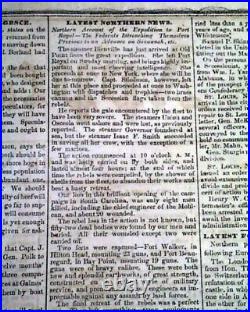 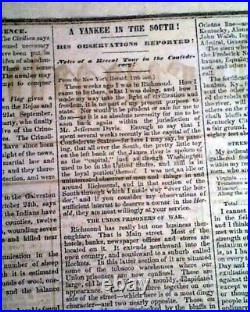 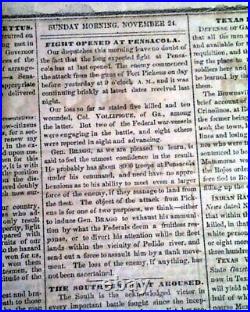 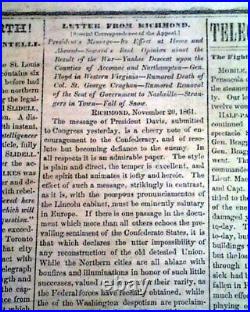 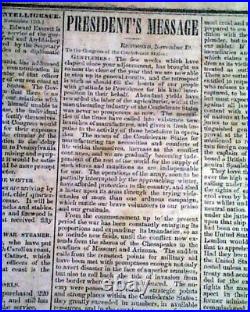 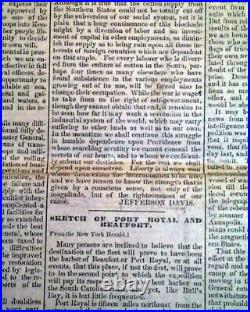 Offered is an original, historic, & collectible old newspaper: MEMPHIS WEEKLY APPEAL, Tennessee, November 27, 1861 Rare Confederate stronghold publication This newspaper had a fascinating history during the Civil War. Memphis was a Confederate stronghold up through the Battle of Memphis on June 6, 1862, at which time the Yankees moved in and it became a Yankee city.

Being a strong voice for the Confederacy, the "Memphis Appeal" newspaper would not continue under Yankee control. On June 6, 1862, the presses and plates were loaded into a boxcar and moved to Grenada, Mississippi, where it published for some time. The Appeal later journeyed to Jackson, Mississippi, Meridian, Mississippi, Atlanta, Georgia, and finally Montgomery, Alabama, where the plates were destroyed on April 6, 1865, only days before the Confederate surrender, halting publication of what had been one of the major papers serving the Southern cause. So this one newspaper published in six different Confederate cities during the Civil War.

This issue was published during the brief 14 month period when Memphis was a Confederate city. The front page has items headed: "Light Breaking Upon the North" which much interesting editorial pro-Confederate commentary; "Kentucky Intelligence" "The Civil War In America" "Georgia Confederate Senators" "Call For the State Militia" Organize! " "Latest From East Tennessee" "A Narrative By Gen. Beauregard" "The Prisoners at Fort Warren" "More Prisoners" "Capture of Messrs. Mason & Slidell and more.

Page 2 has: "The Coast Raid--Our Proper Policy" "The War In the West" "Dispatches to the Black Republican Press" "Fremont & His Crew" "The Mason & Slidell Affair" "From The Potomac" "Louisville Items" "The Southern Giant Aroused" "Fight Opened at Pensacola" A Yankee in the South! - Notes of a Recent Tour in the Confederacy" "The New Military Law and more.

Plus even more war news on pg. 3 including: From The North! " "Battle at Cumberland Gap" "Telegraphic News! " "Skirmishing on the Cumberland" "Fremont's Exodus from Missouri and much more. With all this great content perhaps the best is on the bkpg.

Where is printed the: "President's Message" which takes 1 1/2 columns & is signed in type: Jefferson Davis. "War & Diplomacy" "Affairs in Missouri" "Convention between the Confederates States of America & the State of Missouri" "Sketch of Port Royal & Beaufort" and much more. Complete as a 4 page newspaper, very large size (24 by 31 1/4 inches), all pages protected by a transparent archival overlay which offers nice protection, rejoined at the spine, once cleanly cut across the center but rejoined by the overlay, some light dirtiness.

In general, in nice condition. A rare opportunity for a Confederate newspaper from Tennessee. Please Note: All of our offerings are 100% authentic! We do not offer reprints or reproductions of any kind. They are guaranteed to be original! For this specific item, A U. The per-item additional cost for folders, portfolios, and presentation cases vary. We will still provide tracking and insure them at our expense. Please check with your country's.

We have been dealers in rare newspapers for over 46 years, serve as consultants to multiple museums, and are members of the American Antiquarian Society. Timothy Hughes Rare Newspapers P. Desiring to conduct ourselves honorably in all things. Were it left to me to decide whether we should have a government without newspapers, or newspapers without a government, I should not hesitate a moment to prefer the latter. This item is in the category "Collectibles\Militaria\Civil War (1861-65)\Original Period Items\Other Civil War Original Items".

The seller is "timhu" and is located in this country: US. This item can be shipped worldwide.