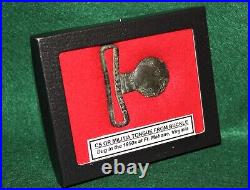 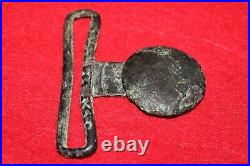 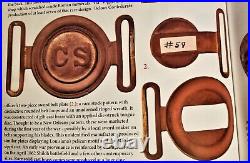 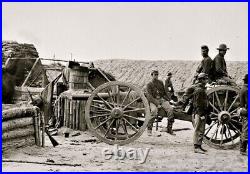 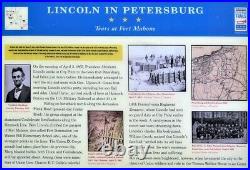 This is another great piece being offered, it is the tongue section of a Confederate or Militia 2-piece buckle. It is solid heavy brass and measures 2 ¼" x 2 ½".

This rare piece was recovered at Confederate Fort Mahone Ft. In the 1950s a new elementary school was being built on the site of the fort when this piece was found. Fort Mahone was established in 1864 as a Confederate Fort in defense of Petersburg. Built as a strong three-sided earthen redoubt with a steep frontal glacis. The fort was located along the southern Confederate defensive lines across from Union Fort Sedgwick, only a few hundred yards away.

It was manned by the 53rd Virginia and had only three artillery pieces and a few mortars in April 1865, even though it was thought to be the strongest fort along the Confederate line (see pictures). The Union siege of Petersburg lasted about 9 months, ending in early April 1865. Fort Mahone was attacked at dawn on April 2, 1865 as the Union forces began to break through elsewhere along the Confederate lines. The Union IX Corps was ordered to take Fort Mahone with some 14,000 men going against about 1,500 Confederate defenders.

Fort Mahone defenses included wooden abatis, fraise and chevaux-de-frise all along the defensive line. The Union IX Corps faced a double row of abatis and Chevaux de frise and a waist deep ditch filled with muddy water. Union troops armed with only hatchets and axes had to cut through these obstacles before the dawn attack.

These troops were easy targets for Confederate sharpshooters, but they successfully cleared a path for the Union attack. Overnight the Confederates withdrew from their positions and by dawn the fort was in Union hands.

Captured by Union forces on April 2, 1865 (see pictures) and abandoned at the end of the war, reportedly leveled later in 1865. In April of 1865, General Grant invited President Lincoln to the Petersburg Battlefield.

They went to tour Fort Mahone and Lincoln was obviously moved by the experience. A plaque is now where the visit took place (see pictures).

Early in the war there was a similar 2-piece Confederate buckle designed; that tongue is nearly identical in manufacture except for the "CS", having the distinctive rounded belt loops (see comparison pictures). If you have a dug wreath, it would go great with this tongue.

It comes in the glass top display case pictured. This item is in the category "Collectibles\Militaria\Civil War (1861-65)\Original Period Items\Belts & Belt Buckles".