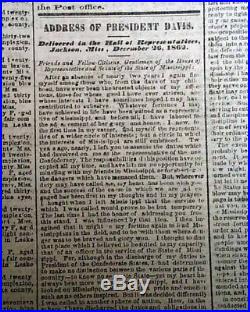 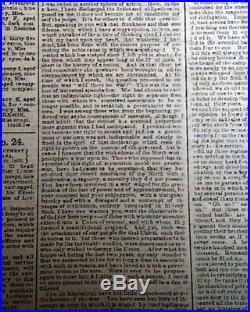 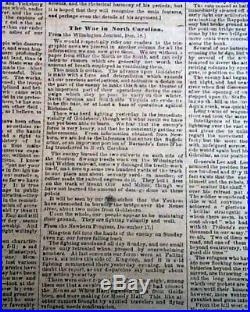 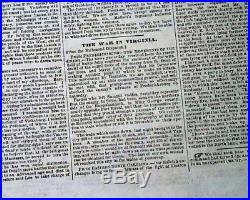 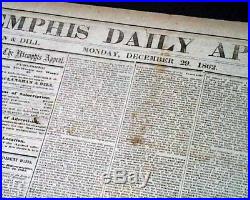 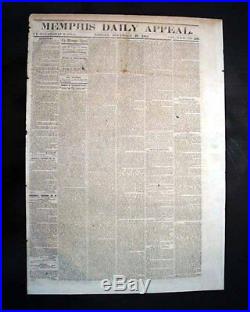 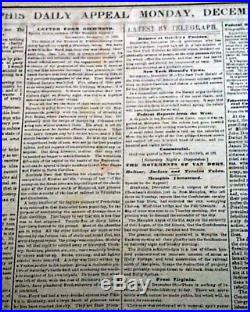 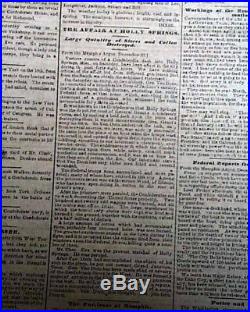 Shown is an original & historic old newspaper, offered to enhance your collectible interest: THE MEMPHIS DAILY APPEAL, Jackson, Mississippi, Dec. 29, 1862 Very rare Confederate title This newspaper had fascinating history as it was chased around the South. Note that this "Memphis" newspaper was published in Jackson, Mississippi.

See the information below concerning its history. The front page is mostly taken up with the: Address Of President Davis - Delivered to the Hall of Representatives, Jackson, Miss. Davis gave this speech during an inspection tour of the western theater. In his speech Davis defended the conscription and exemption acts passed by the Confederate Congress in April, September, and October 1862, which had extended all one-year voluntary enlistments to three years, made white males between eighteen and thirty-five liable to be drafted, and established a series of exempted occupations.

The most controversial provision, adopted on October 11, exempted one white male from every plantation with twenty or more slaves. Also in this issue are: "The War in North Carolina" "From the Rappahannock" "The War In Virginia" "Letter from Richmond" "The Affair at Holly Springs" "West Tennessee" and even more. Complete as a single sheet issue, one quite tiny worm hole affecting 3 words, very nice condition. Memphis was a Confederate stronghold up through the Battle of Memphis on June 6, 1862, at which time the Yankees moved in and it became a Yankee city. The "Memphis Daily Appeal", dedicated to the Southern cause rallying both civilians & soldiers, it was the most important newspaper of the region, soon famously known as the Moving Appeal.

During just a four year period this newspaper published in nine different cities. (credit: Tennessee State Library & Archives). Please Note: All of our offerings are 100% authentic! We do not offer reprints or reproductions of any kind.

We will still provide tracking and insure them at our expense. Please check with your country's.

We have been dealers in rare newspapers for over 43 years, serve as consultants to multiple museums, and are members of the American Antiquarian Society. Timothy Hughes Rare Newspapers P. Desiring to conduct ourselves honorably in all things. Were it left to me to decide whether we should have a government without newspapers, or newspapers without a government, I should not hesitate a moment to prefer the latter. The item "Rare CONFEDERATE Memphis TN Tennessee in JACKSON MS Civil War 1862 Old Newspaper" is in sale since Wednesday, January 4, 2017. This item is in the category "Collectibles\Militaria\Civil War (1861-65)\Original Period Items\Other Civil War Original Items". The seller is "timhu" and is located in Williamsport, Pennsylvania. This item can be shipped worldwide.