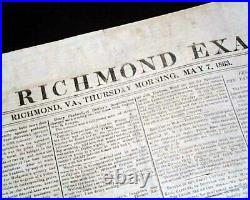 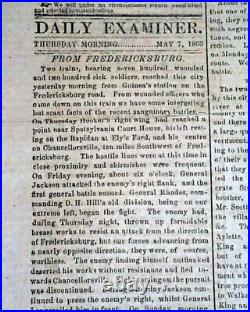 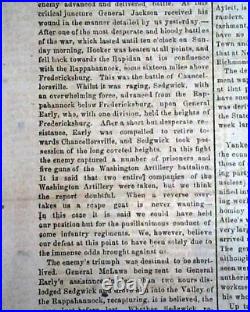 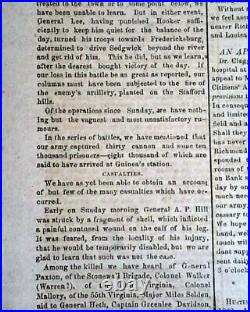 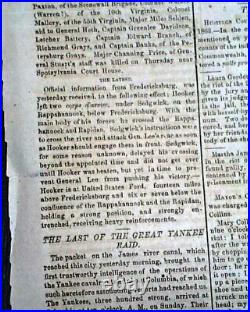 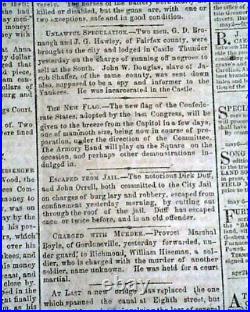 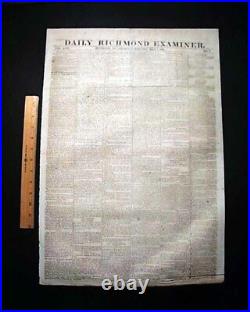 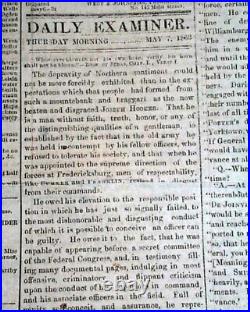 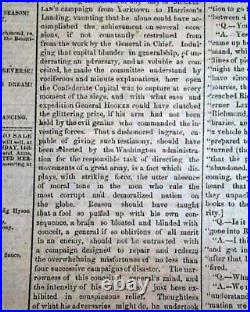 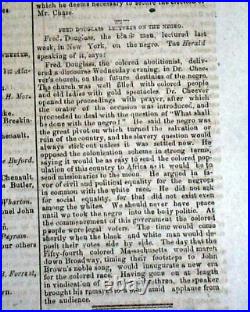 Rare CONFEDERATE Battle of Chancellorsville 1863 Richmond VA Civil War Newspaper. (Note: additional images are located below the description). Offered is an original, historic, & collectible old newspaper: DAILY RICHMOND EXAMINER, Virginia, May 7, 1863 Battle of Chancellorsville, Virginia A "rebel" victory Rare Confederate title Not only is this a nice newspaper from the Confederacy, but it is from the Confederate capital.

A nice front page account of the Battle of Chancellorsville, a major Southern victory. The top of the first column has: "From Fredericksburg" taking most of the column & including. The enemy finding himself outflanked deserted his works without resistance & fled towards Chancellorsville... During Saturday Jackson continued to press the enemy's right, whilst General Lee assailed him in front... This is followed by: "The Last of The Great Yankee Raid" with subheads: "The Yankees in King William" & "Chickahominy Bridge".

Then: "An Appeal for our Wounded". The front page also has: "The Yankee Raid in Georgia--Official Account" with has a nice report signed in type by: Braxton Bragg (see). Other items on the ftpg. Having small heads include: "Official Account of the Destruction of Barges Off Vicksburg" "Bodies of the Fallen Received" "The Wounded--A Call to the Patriotic" "The Chesapeake Artillery" "The New Flag" "Prisoners of War" and more. The back page editorial--always interesting reading in this newspaper--is an assault on General Hooker, defeated at the recent Battle of Chancellorsville, bits including.

The depravity of Northern sentiment cold not be more forcibly exhibited than in the expectations which that people had formed from such a mountebank & braggart as the now beaten & disgraced Joseph Hooker. That he is a man without faith, truth, honor, or any of the distinguishing qualities of a gentleman, is established... Also has: Additional From The North--A Northern Estimate of General Bragg's Army...

(see), which takes over a full column. The back page also has a great item: Fred. Douglass Lectures on the Negro with a brief review of his speech in a New York church, ending with.

Having gone on at length in vindication of his colored brethren, the speaker brought his remarks to a close amid applause from the audience. (see) A great issue with a wealth of historic reporting. Single sheet, very nice, clean condition. Please Note: All of our offerings are 100% authentic! We do not offer reprints or reproductions of any kind.

We will still provide tracking and insure them at our expense. Please check with your country's. We have been dealers in rare newspapers for over 44 years, serve as consultants to multiple museums, and are members of the American Antiquarian Society. Timothy Hughes Rare Newspapers P. Desiring to conduct ourselves honorably in all things. Were it left to me to decide whether we should have a government without newspapers, or newspapers without a government, I should not hesitate a moment to prefer the latter. This item is in the category "Collectibles\Militaria\Civil War (1861-65)\Original Period Items\Other Civil War Original Items". The seller is "timhu" and is located in this country: US. This item can be shipped worldwide.