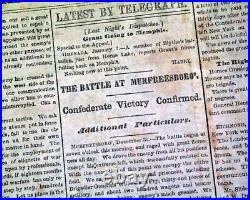 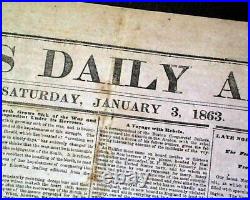 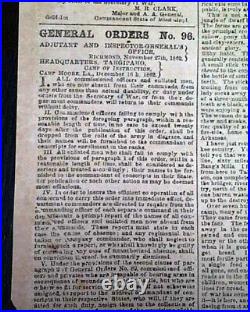 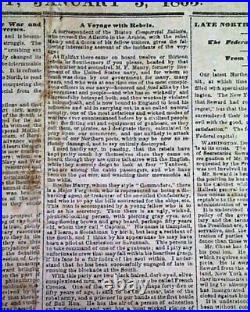 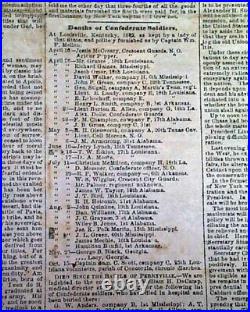 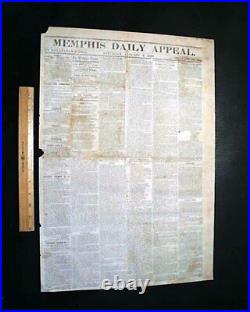 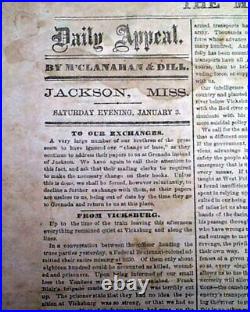 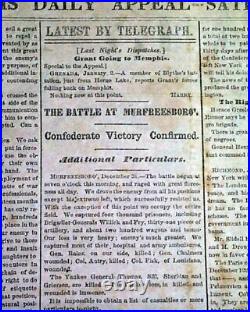 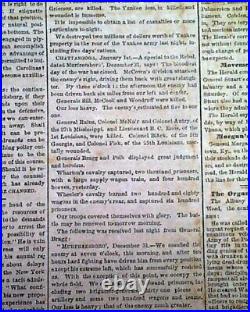 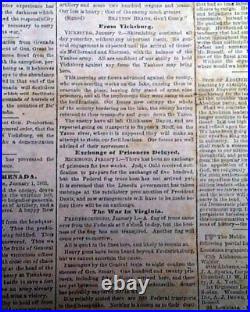 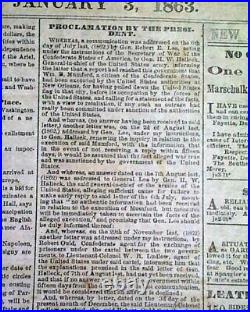 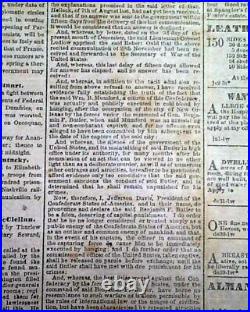 Offered is an original, historic, & collectible old newspaper: THE MEMPHIS DAILY APPEAL, Jackson, Mississippi, January 3, 1863. Battle of Stones River - Murfreesboro, Tennessee Jefferson Davis proclamation Very rare publication. This newspaper had fascinating history as it was chased around the South--see the information below.

The most notable content in the issue is the back page report headed: "The Battle At Murfreesboro" "Confederate Victory Confirmed" "Additional Particulars" which includes a report signed in type by: Braxton Bragg (see). Also on the back page are: "From Vicksburg" "The Future At Vicksburg" Death of Col. Autry" "Letter From Grenada" "River Warfare" "Proclamation By The President takes almost an entire column and is signed in type: Jefferson Davis. "A Proclamation" "By the President of the Confederates States" which takes over a full column and is signed in type: Jefferson Davis. This proclamation is concerning the very controversial execution of William Mumford, a New Orleans citizen who torn down the Yankee flag just prior to it occupation of the city.

The execution was ordered by General Butler. Part of Davis' proclamation includes. But as an outlaw & common enemy of mankind, & that in the event of his capture the officer in command of the capturing force do cause him to be immediately executed by hanging... With much more (see for portions). The front page has war related content as well including: "Late Northern Intelligence--From Burnside's Army" "A voyage with Rebels" "The North Grows Sick of the War & Despondent Under its Reverses" "Deaths of Confederate Soldiers" "From Port Hudson" plus three "General Orders".

Complete as a single sheet newspaper, scattered foxing, a small piece from the spine margin affects 3 words on the ftpg. Memphis was a Confederate stronghold up through the Battle of Memphis on June 6, 1862, at which time the Yankees moved in and it became a Yankee city. The "Memphis Daily Appeal", dedicated to the Southern cause rallying both civilians & soldiers, it was the most important newspaper of the region, soon famously known as the Moving Appeal.

On June 6, 1862, the presses and plates were loaded into a boxcar and moved to Grenada, Mississippi, where it stayed for a few months, until approaching Federal troops threatened again, forcing a move in November 1862 to Jackson, Mississippi, where it published until May 1863, when Federal troops again arrived. By this time, the Appeal had gained notoriety among Union forces as a rebel sympathizer while it remained on the run. The next stop was Meridian, Mississippi, from where, one issue and two days later, the wandering journalists moved on to Mobile, Alabama, then to Montgomery, and ultimately to Atlanta, the economic heart of the Confederacy.

Its final move was to Columbus, Georgia, where Federal forces finally caught up with it. It resumed publication following the war in Memphis on November 5, 1865. During just a four year period this newspaper published in nine different cities. (credit: Tennessee State Library & Archives). Please Note: All of our offerings are 100% authentic!

Please check with your country's. We have been dealers in rare newspapers for over 46 years, serve as consultants to multiple museums, and are members of the American Antiquarian Society. Timothy Hughes Rare Newspapers P. Desiring to conduct ourselves honorably in all things.

Were it left to me to decide whether we should have a government without newspapers, or newspapers without a government, I should not hesitate a moment to prefer the latter. This item is in the category "Collectibles\Militaria\Civil War (1861-65)\Original Period Items\Other Civil War Original Items". The seller is "timhu" and is located in this country: US. This item can be shipped worldwide.