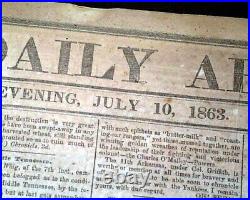 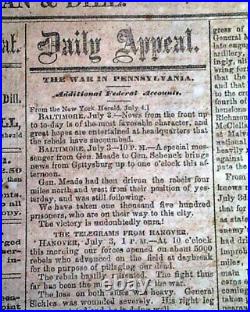 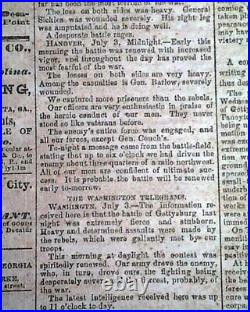 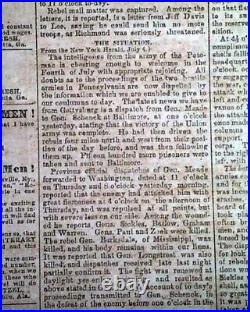 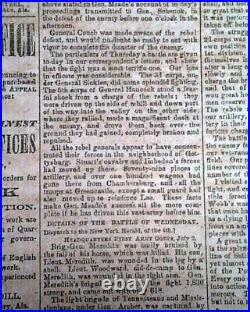 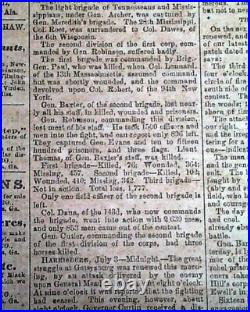 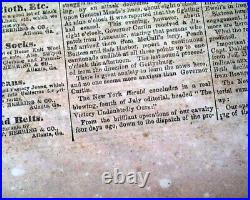 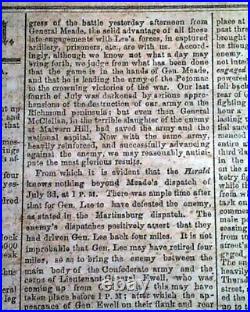 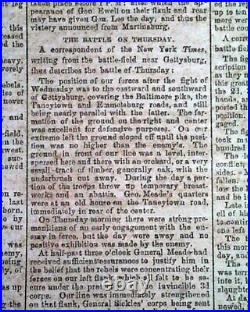 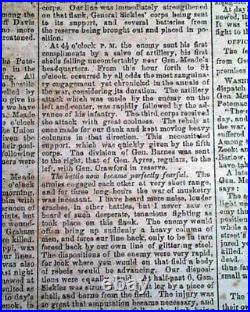 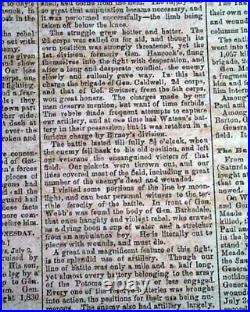 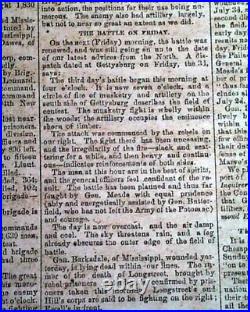 Rare BATTLE OF GETTYSBURG in a Confederate Atlanta GA 1863 Civil War Newspaper. (Note: additional images are located below the description). Offered is an original, historic, & collectible old newspaper: THE MEMPHIS DAILY APPEAL, Atlanta, Georgia, July 10, 1863. Very Rare Confederate title from the "traveling" newspaper Battle of the Gettysburg - Robert E. If the title and city of publication seem to be in conflict, they are not. This newspaper had a fascinating history during the Civil War. Memphis was a Confederate stronghold up through the Battle of Memphis on June 6, 1862, at which time the Yankees moved in and it became a Yankee city. Being a strong voice for the Confederacy, the "Memphis Appeal" newspaper would not continue under Yankee control. On June 6, 1862, the presses and plates were loaded into a boxcar and moved to Grenada, Mississippi, where it published for some time. The Appeal later journeyed to Jackson, Mississippi, Meridian, Mississippi, Atlanta, Georgia, and finally Montgomery, Alabama, where the plates were destroyed on April 6, 1865, only days before the Confederate surrender, halting publication of what had been one of the major papers serving the Southern cause. So this one newspaper published in six different Confederate cities during the Civil War. This issue reports on the front page what is considered by many the most significant & historic battle of the Civil War: the Battle of Gettysburg. And terrific to have this report in a Confederate newspaper.

Three of the eight columns are taken up with Gettysburg. The top of the 2nd column is headed: "The War In Pennsylvania" "Additional Federal Accounts" with reports from the N. Herald of July 4, and subheads including: "The Telegrams from Hanover" "The Situation" "Details of the Battle of Wednesday" "The Battle On Thursday" "the Battle On Friday" The Official Dispatches of Gen. Meade" and "The Yankee Loss" This is followed immediately by another report headed: "The Battle of Gettysburg, Pennsylvania taken from the Phila. Inquirer, and following this is another report headed: "The Yankee Army Sorely Pressed".

One of the reports begins. The Yankees suffered terribly, according to their own confessions... The detail in these reports is considerable. Additional war items on the ftpg.

Wilson & His Boys" "The Army of Independence--Its Spirit & Condition" "Emancipation in Missouri" "Farewell Address of Gen. Hooker" "Middle Tennessee" "Matters About Port Hudson--Fight with the Federal Cavalry. There is also an article: "The Excitement in Pennsylvania" which includes several dispatches dated at Harrisburg, one noting: At daylight this morning the battle was again renewed. The battle must have been in the neighborhood of Gettysburg.

Plus other summations on the 3 day battle (see). There is also a great deal of war-related content on the back page but it pales in comparison to the ftpg. But a few items are related, including: "Federal Victory Claimed" and "Later--Rumors from the Battle Field in Pennsylvania" and Important News from Gen.

Lee's Army which mentions. General Lee has defeated the enemy. Meade is retreating on Baltimore--Gen. And also: Later From Richmond and Gen.

All information of the battle of Gettysburg... Says our loss on the first two days was not very great but on Friday it was heavy, especially in Pickett's division...

Has given place to a feeling of confidence in the ability of Gen. Lee to resume offensive operations... The men in fine spirits and ready for another fight...

Our army fell back with the greatest deliberation, & there was no demoralization. It is generally understood the falling back was caused by a difficulty in obtaining supplies...

Complete as a single sheet newspaper, various chipping & tears at the margins causing minor loss of text to the last column of the ftpg. And the first column on the bkpg.

A very significant issue and terrific to have this content on the front page, and in a Confederate "Memphis" newspaper printed in Atlanta. Please Note: All of our offerings are 100% authentic! We do not offer reprints or reproductions of any kind. They are guaranteed to be original! For this specific item, A U.

The per-item additional cost for folders, portfolios, and presentation cases vary. We will still provide tracking and insure them at our expense. Please check with your country's. We have been dealers in rare newspapers for over 44 years, serve as consultants to multiple museums, and are members of the American Antiquarian Society.

Timothy Hughes Rare Newspapers P. Desiring to conduct ourselves honorably in all things. Were it left to me to decide whether we should have a government without newspapers, or newspapers without a government, I should not hesitate a moment to prefer the latter. This item is in the category "Collectibles\Militaria\Civil War (1861-65)\Other Civil War-Related Items". The seller is "timhu" and is located in this country: US.