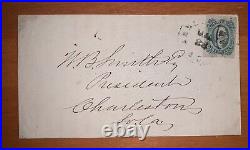 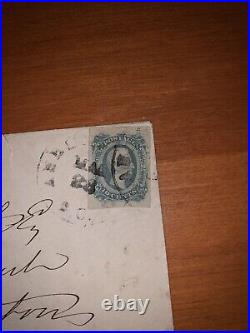 ORIGINAL CONFEDERATE ENVELOPE ADDRESSED TO PRESIDENT OF UNION BANK OF S. President of The Union Bank of South Carolina. The Union Bank was in business from roughly 1811 until 1865.

After a period of dormancy following the Civil War, it resumed operation in 1870 and remained in business for the next decade. "THE RICHEST MAN IN CHARLESTON". Obituary for William Burroughs Smith. Williams Burroughs Smith, the richest man In Charleston, died at his residence on Broad Street at 7 o'clock this morning.

Smith is one well known throughout the State. He was born In Charleston seventy-seven years ago, being the son of Robert Smyth, an obscure citizen. Young Smith (or Smyth as he was then called-he changed his name subsequently, on account of some family affair) went into the cotton business at the age of fifteen with an old factor named Hatchins, who left Charleston subsequently. His next connection was with the firm of Jones &. Which became Jones & Smith, and finally Wm.

As a dealer in cotton and as a merchandise broker Mr. In early life he married, a Miss Jones, daughter of his partner. Smith was for a long time president of the old Union Bank, and he managed its affairs as he did his own with a wonderful degree of acuteness. He turned every dollar that he made to account and fortune seemed to favor all of his investments.

He gradually accumulated a large fortune which amounts to upwards of two and a half millions of dollars. He leaves three daughters, the eldest of whom is the wife of Mr.

The second is the wife of Mr. Whaley, and third of the late I. Between these three families, therefore, this large fortune will be divided.

Smith has always led a very quiet and retired life and he never made any show of his wealth. He was at all times courteous in the extreme. Smith had been critically ill for some time and his end was not unexpected. (From'The State' newspaper, Columbia, SC, June 24, 1892).