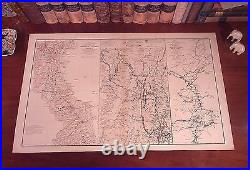 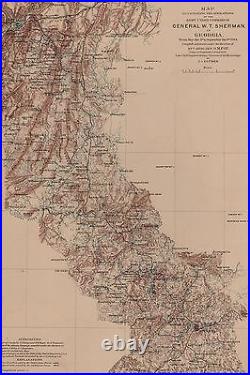 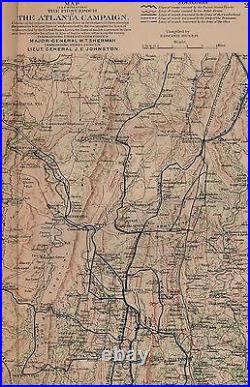 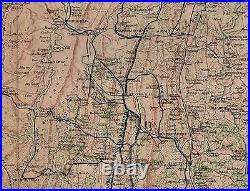 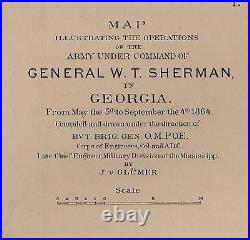 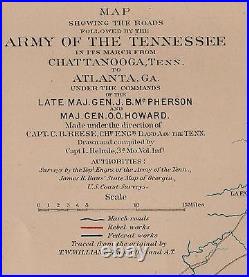 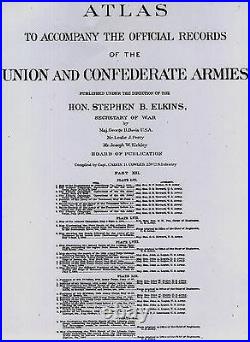 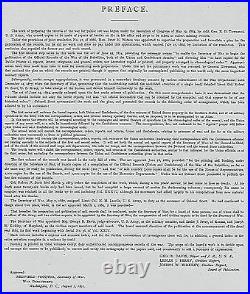 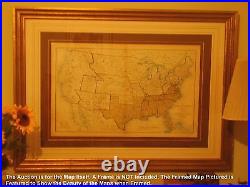 Original Plate of "The Official Atlas to Accompany the Official Records of the Union and Confederate Armies, " Published the by the Resolution of the U. 1864, to serve asThe Official Historical Record of The Civil War, to be Accompanied by an Atlas of Battles, Troop Positions, Skirmishes, and Topography. Of the only 10,000 Published, less than 1,000 Complete Atlases Remain. Fine Adornment of Civil War History.

Impressive on any Home or Office Wall. Map of 1864 Sherman's First Epoch on his March to the Sea Chattanooga to Atlanta May 5, 1864 to September 4, 1864 Original Lithograph Plate LVII (#57) of the 175 Plates of The Official Folio Historical Record of The Official Atlas to Accompany the Official Records of the Union and Confederate Armies, Ordered by Act of Congress in 1864; Entered into The Library of Congress; and Published by the U. Publishing Office, Containing all Battle Maps, Field Reports, Correspondence, Troop Positions, Skirmishes, Coastal Surveys, Naval Battles, and Topography during the Four Years of the War - The undertaking of Accumulating and Assembling The Atlas taking over 30 years to complete.

Original Plate LVII (#57) of the 175 Published. (1) Map Illustrating the Operations of The Army Under the command of General W. From May 5, 1864 to September 4, 1864. Compiled and Drawn Under the Direction of Bvt. Poe, Corps of Engineers by J. " (2) "Map Illustrating THe First Epoch of The Atlanta Campaign, Embracing the Region from the Tennessee River to the Oostanaula River, Showing the Positions held and lines of works by the Enemy, also the lines of works erected by the U.

Forces, the Lines of March Traversed by them and their relative location in Line of Battle when Attacking the Enemy. " (3) " Map Showing the Roads Followed by the Army of the Tennessee in its March from Chattanooga, Tennessee to Atlanta, Georgia, Under the Command of the Late Maj. Howard, Made Under the Direction of Captain C. Reese, Chief Engineer, Drawn and Compiled by Capt. Confederate Forces Shown in Red.

No soiling, marks, or writings. Mild foxing along fold indentation.. Original Lithograph Engraved by Julius Bien for the "The Official Atlas to Accompany the Official Records of the Union and Confederate Armies;" Commissioned by Resolution of Congress May 19, 1864, in accordance to serve as The Official Historical Record of the War. The Atlas Entered the Public Domain when the Atlases were withdrawn from Libraries and Other Federal Depositories over the past Century.

Only 10,000 were Published, and Less than 1,000 Complete Atlases Remain. Impressive On Any Home or Office Wall Dimensions: 19 " x 29.5" Fine Adornment of Civil War History. Great for Family History as Map Shows Towns & Landmarks during the War; Some of Which No Longer Exist Today. Map Shows Names of Citizens' Homes & Farms, Churches, Taverns, School Houses, & Many Other Landmarks. A Few of the Homes, Farms, Depots, Forts, Mills, Churches, & Other Landmarks located on the Map: Homes and Farms of C.

The Atlas to Accompany The Official Records of the Union and Confederate Armies was Commissioned with Resolution of the U. Congress in 1864, by which Adjt. Townsend was Appointed Directorship of the Collection and Preparation of the Atlas, which was ultimately Completed and Published in 35 Parts in Sets of Five Lithographic Plates by the U.

The 175 Plate Volume dedicated to Preserving a Historical Record of the War, each Map portraying a wealth of Knowledge and Information on Division, Corps, and Troop Positions; Battle Lines, Topography, and Military Strategy. A Frame is Not Included. The Framed Map shown is a Personal Lithograph of the Atlas Featured to Show the Beauty of the Maps when Framed. Greetings from Historical Savannah, Georgia: Founded 1733.

Some, to beautify their halls, parlors, chambers, and libraries... Loveth, getteth, and useth maps, charts, and geographical globes. John Dee, Advisor to Queen Elizabeth I. This item is in the category "Antiques\Maps, Atlases & Globes\North America Maps".

The seller is "jonesjackson" and is located in this country: US. This item can be shipped worldwide.