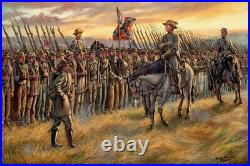 Being offered is a beautiful; vibrant and colorful Limited Edition signed and numbered print on a nice heavy satin Semi-gloss paper stock. Print comes with numbered Certificate of Authenticity. The artwork is from a painting Titled Almost Home By Military Historical Artist Mark Maritato depicting the moment when Confederate Adj. Tod Carter volunteers to lead his former regiment, the 20th Tennessee Infantry in a charge toward the Union Lines entrenched just South of Franklin Tennessee; Tod's home.

Tod Carter had been promoted from the ranks of the 20th to Adjutant in the Confederate Army of Tennessee. Major General John Schofield's Federal infantry were entrenched just yards from Tod's home doorstep along the Columbia Turnpike. Tod Led the 20th Tennessee forward astride his dapple gray horse "Rosencrantz" shouting Follow me Boys, I'm Almost Home!

Tod was mortally wounded in the charge, felled by several Yankee bullets. The next morning, Tod's father found his son barely clinging to life on the battlefield and brought him home where he would later succumb to his injuries with his family gathered all around him. Tod had not been home in three years since he left for war. The item "Maritato Signed Civil War Limited Edition Print Almost Home Battle of Franklin" is in sale since Saturday, October 2, 2021. This item is in the category "Art\Art Prints".