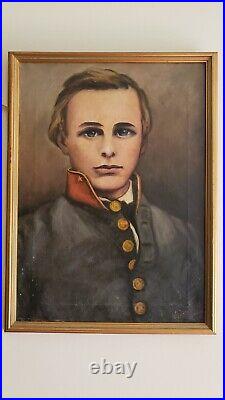 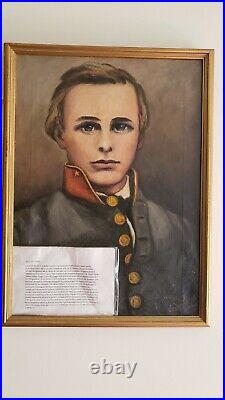 Furthermore, you have the pleasure of owning and displaying your investments. Know that your investments in Civil War collectibles are sound and safe. Stay away from items with replacement parts and/or in poor condition.

Everything I provide is investment grade quality. This is a wonderful oil-on-canvas of Major John Pelham.

I cannot make out the artist's signature but have included a photo. The outer frame appears recent, however the stretcher to which the canvas is fastened dates between 1904 and 1939. There is a maker's stamp on the stretcher, Anco Inc / Glendale L. Anco began manufacturing wood products in 1904.

Known for quality premium work, they surely would have been using hardware by 1940. As can be seen in the images, this stretcher is hand made and has multiple alignment shims, no visible post 1939 hardware. Painting outside measurements (including frame) 17.5" x 23.5", while the measurements of the exposed painted canvase are 15.25"x21". John Pelham was known at West Point as a charming, honorable, and principled young man. He is known as the greatest equistarian in school history and was ranked well in his class.

John withdrew from West Point a week before graduation, because he didn't feel it would be proper to graduate West Point then resign and commission in the Confederacy. He wrote at length about wanting to graduate, but in the end he stuck to his principles and did what he thought was right in his heart. Lee, Stonewall Jackson, and JEB Stuart all praised John Pelham's performance at First Manassas / Bull Run, his coolness under fire, and his strategic placement and effect of his artillery battery, and he was quickly promoted to Major, commanding Horse Artillery Battalion in JEB Stuart's Cavalry. He was known as "Lee's Artillerist" and "The Gallant Pelham", and was loved and legended throughout the South. His skills and effectiveness with his Battery were know and talked about throughout the Army.

One day while his Battery was not engaged, he observed the 3rd Virginia Cavalry preparing a Cavalry charge, and he joined together with JEB Stuart and other officers in leading the charge at Kelly's Ford. An Artillery shell exploaded among the charging cavaliers, and Major John Pelham was struck in the neck by shrapnel. JEB Stuart and Robert E.

Lee had his remains laid in State in the great hall of the Capital, in Richmond, an honor shared, to my knowledge, by no other Confederate General during the war. John Pelham was a Southern Gentleman, a man of character, integrity, principle, honor, and duty. Please view my other listings for additional Investment Grade Military Collectibles. I frequently travel to specialized and general trade shows, conventions, auctions, and private sales and viewings all over the country, and maintain a network of the most reputable collectors and dealers in the community, and limit my acquisitions to this network.

My objective is to both collect for myself, and to bring to you only truly authentic, historic investment grade military collectibles. My pricing is very competitive, and my customers include dealers and collectors alike. My aim is ultimately to make quality investment grade items available to those who like investing in interesting items that steadily appreciate in value, as well as being displayable and of historic significance. This item is in the category "Collectibles\Militaria\Civil War (1861-65)\Other Civil War-Related Items".