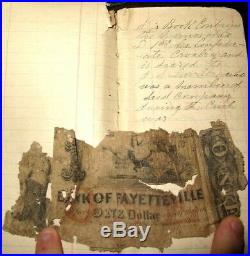 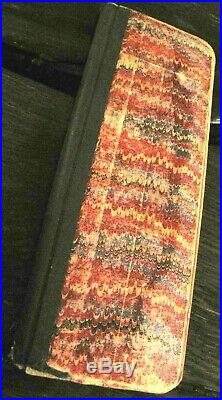 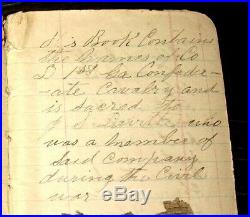 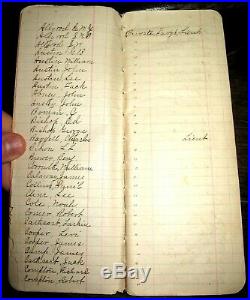 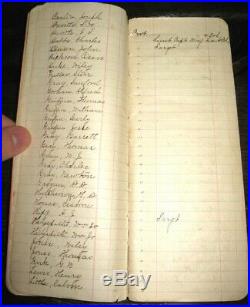 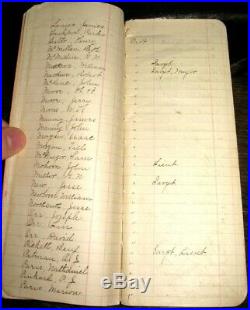 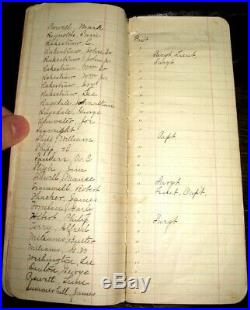 OF THE 1ST GEORGIA CAVALRY, COMPANY G. DETAILING THE NAME OF EACH COMRADE WHO SERVED IN. THE COMPANY AND REGIMENT WITH HIM, AS WELL AS THEIR. JACOB STATES ON THE FIRST PAGE.

THIS BOOK CONTAINS THE NAMES OF CO D 1ST GA CONFEDERATE CAVALRY AND IS SACRED TO J. DAVITTE WHO WAS A MEMBER OF SAID COMPANY DURING THE CIVIL WAR. INTERESTINGLY, JACOB'S BROTHER SAMUEL. WAS A COLONEL IN THE SAME REGIMENT. AND LEAD THEM IN BATTLE.

JACOB LIKELY WROTE THIS AFTER THE. THE CHARACTERISTICS OF THE LEDGER. DATE IT IN THE LATE 1870S. ALSO FOUND IN THE LEDGER IS A PRE CIVIL WAR ONE DOLLAR BILL FROM THE BANK OF FAYETTEVILLE, NC IN VERY WORN SHAPE, LIKELY A MEMENTO KEPT BY DAVITTE AT SOME POINT IN THE WAR; IT LOOKS LIKE HIS REGIMENT SURRENDED OUTSIDE FAYETTEVILLE ABOUT ONE HOUR AT THE CONCLUSION OF THE WAR, POSSIBLY INDICATING THE REASON OF THIS BILL?

LEDGER IS BOUND IN MARBLED PAPER OVER OBLONG BOARDS AND A FABRIC SPINE, WITH ONLY 12 PAGES USED. IT MEASURES 9.5" X 3.75". A FANTASTIC PIECE OF CONFEDERATE HISTORY. Aragon, Polk County, Georgia, USA.

23 Feb 1914 (aged 69). Jacob was the son of John Citon Davitte and Ann J. He married Sarah Susan Burge the daughter of William Twitty Burge and Rachel Mildred Smith. The home he built right after the CW is still standing in Aragon. He also built the 1st (and only) round house built entirely of Rockmart Cement.

The house has 2 floors both identical, each floor is broken into 4 rooms with an outside entrance for each room and a fireplace in each room. There is a central chimney. Each room has it's own window to obtain the cross winds. It was built because Jacob had asthma and he believed that the fresh air was good for him. He and his brother, Samuel William Davitte both fought in the CW.

Samuel was a Colonel and leader of the 1st GA CAV, Co. Samuel was born in 1831 in South Carolina. As of now there is no record of when he died. He is interred in the Davitte Cemetery.

In the Confederate States Army. During the American Civil War.

For the duration of the war it switch between these two for numerous times; the only change being a stint with the Department of South Carolina, Georgia and Florida in early 1865 before returning to the AoT. It was surrendered as part of this army at Bennett Place in North Carolina on April 26, 1865; fielding less than 50 men. CONFEDERATE ROLL OF 1ST GA CAVALRY, CO D. Brown, Ceberne Bryent, James Callaway, O. Carroll, James Carruth, William H. Carter, Joseph Carter, James Cathcart, L. Cone, Robert Cooner, James Cooper, O. Grogan, William Hedgepath, Joseph H. Hix, Charles Holoman, Seaborn House, H.

The seller is "mantosilver" and is located in Spencerport, New York. This item can be shipped worldwide.