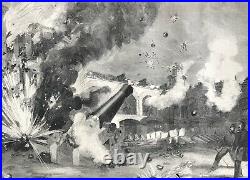 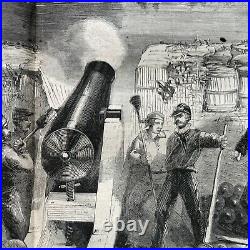 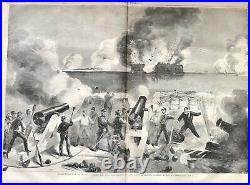 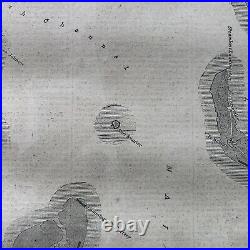 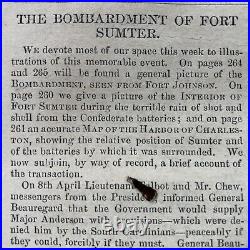 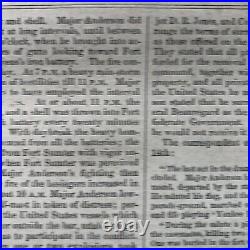 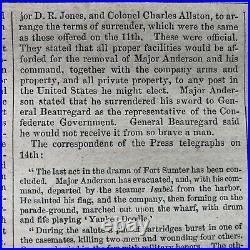 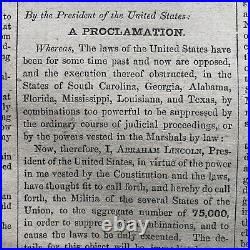 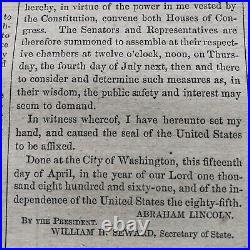 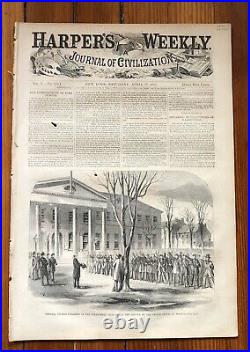 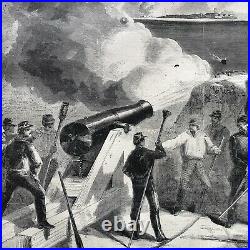 This issue boasts a front-page prominent headline report announcing the bombardment of Ft Sumter while the inside conatins a large, double-page centerfold engraving of the event. Also inside is a PROCLAMATION from President ABRAHAM LINCOLN calling for 75,000 volunteers to put down the resistence, with Lincoln's signature in block type after the proclamation. Perfect for framing and display! This historic piece would look great hanging in the home of any modern-day CIVIL WAR historian or collector. Fort Sumter is a sea fort in Charleston, South Carolina, notable for two battles, the first of which signified the start of the American Civil War.

It was one of a number of special forts planned after the War of 1812, combining high walls and heavy masonry, and classified as Third System, as a grade of structural integrity. Work started in 1829, but was incomplete by 1860, when South Carolina seceded from the Union. The First Battle of Fort Sumter began on April 12, 1861, when Confederate artillery fired on the Union garrison. These were the first shots of the war and continued all day, watched by many civilians in a celebratory spirit.

The fort had been cut off from its supply line and surrendered the next day. The Second Battle of Fort Sumter (September 8, 1863) was a failed attempt by the Union to retake the fort, dogged by a rivalry between army and navy commanders. Although the fort was reduced to rubble, it remained in Confederate hands until it was evacuated as General Sherman marched through South Carolina in February 1865. Harper's Weekly was the most widely read illustrated newspaper in the United States throughout the period of the Civil War. So as not to upset its wide readership in the South, Harpers took a moderate editorial position on the issue of slavery.

Publications that supported abolition referred to it as Harpers Weakly. The Weekly had supported the Stephen A. Douglas presidential campaign against Abraham Lincoln, but as the American Civil War broke out, it fully supported Lincoln and the Union. Some of the most important articles and illustrations of the time were the Weeklys reporting on the war.

Very Good condition, with sporadic worm holes. This listing includes the complete entire original newspaper. Every item we sell is original printed on the date indicated at the beginning of its description, unless clearly stated as a reproduction in the header AND text body.

This is truly a piece OF HISTORY that YOU CAN OWN! The item "BEST 1861 newspaper CIVIL WAR BEGINS Confederates Bomb FORT SUMTER Charleston SC" is in sale since Tuesday, February 4, 2020.

This item is in the category "Collectibles\Paper\Newspapers\Pre-1900". The seller is "boyl-timo" and is located in Oxford, Maryland.