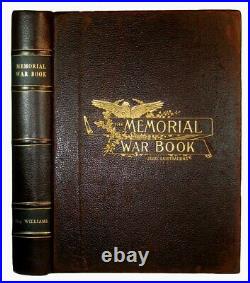 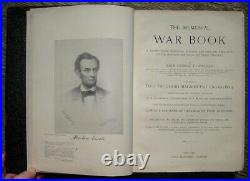 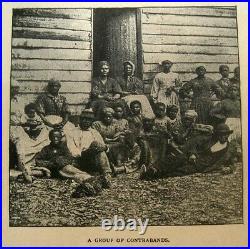 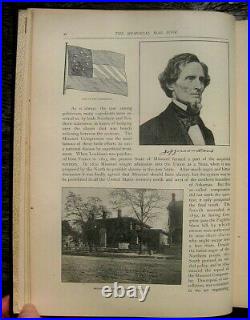 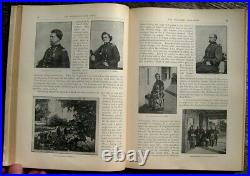 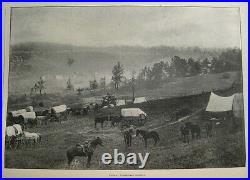 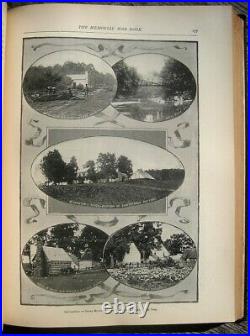 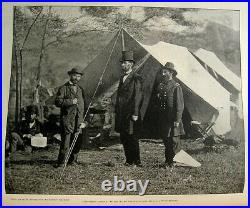 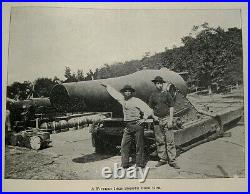 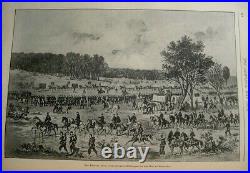 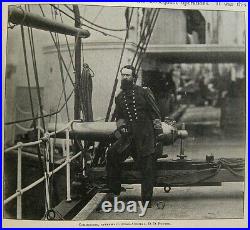 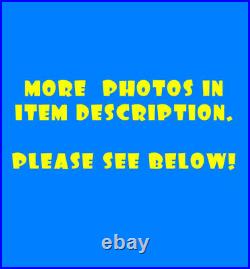 THE MEMORIAL WAR BOOK As Drawn From Historical Records and Personal Narratives Of the Men Who Served in the Great Struggle. Illustrated by Two Thousand Magnificent Engravings, Reproduced Largely from Photographs Taken by the U. Brady and Alexander Gardner, Being the Only Original Photographs Taken During the War of the Rebellion; Making a Complete Panorama of This Greatest Event in History Including Portraits of the Leaders and Commanders of Both the Federal and Confederate Armies and Navies, Giving for the First Time, a Complete Pictorial Representation of the Scenes, Battles and Incidents, the Whole Forming a Fitting Memorial of the Greatest Event of the Century, the Most Momentous of the Ages. Published in 1894 by the Judge Publishing Company, New York.

12 x 9 leather binding with gilt title on cover. Illustrated with photographic reproductions of actual Civil War photographs by Matthew Brady and Alexander Gardner, along with other illustrations. Exterior as shown in photo.

This rare surviving collection of Civil War images has been expertly restored by a professional book conservator. A new morocco leather spine has been added, the binding has been reinforced with new inner hinges, and discreet paper repairs to the edges of the title page.

This is a book that will last for generations to come. Text is clean and complete.

This is a rare and important pictorial history of the Civil War, chiefly illustrated with photographic reproductions made directly from glass plate negatives shot on the spot by famous Civil War photographers Matthew Brady and Alexander Gardner. The photographic material is accompanied by some artists renderings of battle scenes, etc. And a descriptive narrative told from the perspectives of the men who personally fought in the War of the Rebellion.

The actual scenes of the Civil War have not yet been described in a way to afford a realistic idea of their character, although participants have given, from time to time, abundant individual narratives of what they saw and did. The object of this MEMORIAL WAR BOOK is to present a series of pen pictures drawn from material that has never before been collected. It is not a history of the War, but a series of personal reminiscences of stirring adventures and lifelike descriptions of campaigns and battles, as the soldier saw them, with sufficient memoranda of the events attending the progress of the struggle to give the reader an understanding of their relative importance. It has been the aim of the author to avoid all technicalities, and describe the heroic deeds of Federal and Confederate soliders, just as the men themselves would do. But the greatest value of this work is the absolute fidelity of the illustrations.

Many were taken during the progress of hostilities, and are now given to the public for the first time. These were not sketches, but actual photographs, and can never be reproduced, as the originals are rapidly fading. The reader is thus placed on the very ground where the historic scenes of war occurred. Most of the illustrations in this work are reproductions from the celebrated photographs made by Matthew B.

Brady and Alexander Gardner, under authority of the United States Government. These pictures are original photographs taken during the War of the Rebellion.

It is more than a quarter century since the sun painted these real scenes of that great war, and the negatives have undergone chemical changes which makes it slow and difficult work to get prints from them. Of course, no more negatives can be made, as the scenes represented by this series of war views have passed away forever. The great value of these pictures is, therefore apparent. Happily our Government authorized, during the war, skillful photographers to catch with their cameras the reflection, as in a mirror, of very many of those thrilling and interesting scenes. These views vividly renew the memories of our war days. The camp, the march, the battlefields, the forts and trenches, the wounded, the prisoners, the dead, the hurriedly made graves, and many other of these once familiar scenes are photographically portrayed and perpetuated. These are not sketches or imaginary scenes, but are the original photographs taken on the spot. Chapter One Origin of the National Quarrel. Chapter Two The First Blow and Its Consequences. Chapter Three The North and the South Rushing To Arms.

Chapter Four How the Battle of Big Bethel Was Fought and Lost. Chapter Five The Battle of Bull Run and Subsequent Federal Rout. Chapter Six The Sections Girding Their Loins for Mortal Struggle. Chapter Seven Sea-Coast Operations and the Federal Blockade.

Chapter Eight The Port Royal and Hilton Head Expedition. Chapter Nine Capture of Fort Henry by General Grant and Commodore Foote. Chapter Ten The Fall of Fort Donelson on the Cumberland River. Chapter Eleven The Combat Between the Monitor and the Merrimac. Chapter Twelve Opening of McClellans Peninsular Campaign.

Remember folks, this is an 1894 FIRST EDITION. This book is 126 years old. Please be sure to add me to your List of Favorite Sellers.

Don't miss out on any of my latest listings. NEETMOK BOOKS IS A REGISTERED MEMBER OF EBAYS VERO PROGRAM.

When you prepare your listings you generally should use only material text, photographs, etc. And trademarks/names that you created or own yourself or licensed from the owners. Item description text; lists of contents, lists of illustrations/photos; scanned images, etc.

UNAUTHORIZED USE OF ITEM DESCRIPTION TEXT INCLUDING SUMMARIES OF CONTENTS, ILLUSTRATIONS, ETC. PHOTOS OR OTHER PROPRIETARY INTELLECTUAL PROPERTY IS STRICTLY PROHIBITED AND WILL BE REPORTED TO EBAYS VERO DEPARTMENT FOR IMMEDIATE ACTION. The item "1894 CIVIL WAR Photo Book MATHEW BRADY Military UNION CONFEDERATE Army Navy US" is in sale since Tuesday, October 27, 2020. This item is in the category "Books\Antiquarian & Collectible".