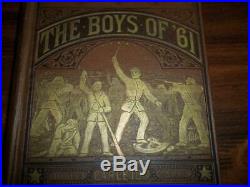 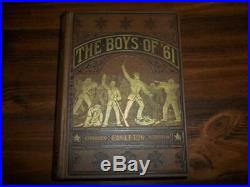 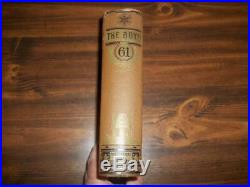 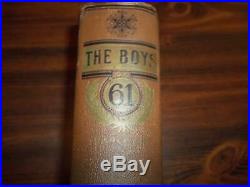 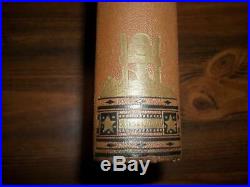 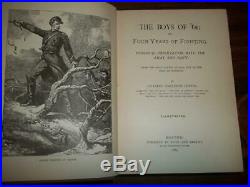 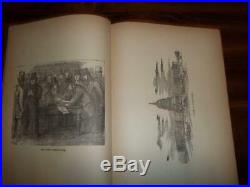 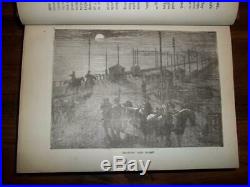 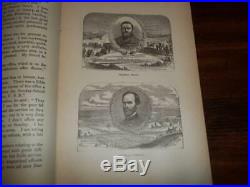 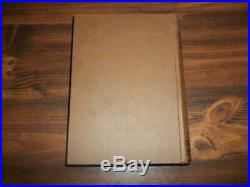 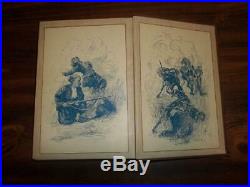 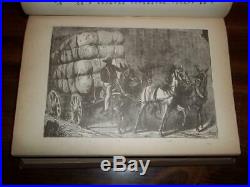 1885 ABRAHAM LINCOLN CIVIL WAR UNION CONFEDERATE SLAVERY EMANCIPATION GETTYSBURG. THE BOYS OF'61; or, FOUR YEARS OF FIGHTING. PERSONAL OBSERVATION WITH THE ARMY AND NAVY, FROM THE FIRST BATTLE OF BULL RUN TO THE FALL OF RICHMOND.....

BY CHARLES CARLETON COFFIN, AUTHOR OF "THE BOYS OF'76, " "THE STORY OF LIBERTY, " WINNING HIS WAY. " "MY DAYS AND NIGHTS ON THE BATTLEFIELD, " "FOLLOWING THE FLAG, " "OUR NEW WAY ROUND THE WORLD, ETC.

BOSTON: PUBLISHED BY ESTES AND LAURIAT, 301-305 WASHINGTON STREET. 558 PAGES, HARDCOVER WITH OVER 80 ILLUSTRATIONS AND MAPS. THE BOOK IS COMPLETE CLEAN AND IN VERY GOOD + CONDITION..... This volume, though historic, is not a history of the Rebellion, but a record of personal observations and experiences during the war, with an occasional look at affairs in general to give clearness to the narrative. The time has not arrived for the writing of an impartial history of the conflict between Slavery and Freedom in the United States.

Reports of military operations are incomplete; documents in the archives at Washington are inaccessible; much material remains to be gathered before the patient historian can sift the wheat from the chaff. More than this, the war of ideas is not yet ended.

Defeated Rebels in some parts of the South are bent on exterminating the African race. Few of those lately in rebellion plead guilty of having committed a crime; taking up arms against the government they consider to have been a blunder only.

We are, therefore, too near the great events to render proper judgment upon questions in which our principles and sympathies have been enlisted. The chapter concerning the Confederate Cotton Loan may seem to be out of place in a volume of which so large a portion is given to narrative, but I trust that it will be acceptable to the general reader, inasmuch as it reveals the efforts of the Rebels to array all Europe against the United States in the late struggle. The correspondence in my possession was picked up in the streets of Richmond, and will be of value to the future historian.

The chapter in question is but an outline of the operations of the Confederates abroad. In looking over the sheets as they came from the press, several errors relative to the organization and formation of troops in battle have been detected, which, however, will appear in but a few copies. Undoubtedly there are others, and the writer will esteem it a favor to be put right wherever he is in the wrong. Few official reports of regimental and brigade officers have been published, while the reports of division and corps commanders are only general in their statements.

The true history of battles cannot be given till the history of regiments is written. My stand-point as an observer is that of one whose instincts from early childhood have been on the side of Freedom. I have ever believed that Civil Liberty is the birthright of all men, and from the firing upon Sumter to the close of the contest had full faith that the people, under God, would subdue the Rebellion, and give freedom to the slave. The four years have been worth a century of ordinary life; for in the mighty contest Right has triumphed over Wrong, and the human race, with a clearer perception of Truth and Justice as the sure foundation of government, is moving on to a higher civilization.

PLEASE SCROLL ALL OF THE WAY DOWN TO SEE ALL PICTURES.... - Dulness in the Streets. - Visit to Fort McHenry. - Material of the Army. - The Gathering of the Rebels.

- A Dinner in the Field. - Vallandigham and the Ohio Boys.

- Patriotism of the Soldiers. - Mutiny of the Garibaldi Guard. - General Mansfield's Wrath.

- Living on a Name. - The Sirens of Virginia. - A South Carolina Chattel. - His Search for Chickens.

- The Morning -- Progress of the Battle. - The Turning of the Tide -- At the Spring -- The Panic -- The Teamsters. - The Rebels on the Point of Retreating. - Wonderful Stories of the Rebels.

- Union Men of Virginia. - Bitterness of the Rebels. - Seductive Influences of Slavery.

THE FALL OF 1861.- Disaster at Ball's Bluff. - The News in Washington. - How President Lincoln received it. - His tenderness of Heart. Lincoln in his Springfield Home.

- Our Host at Pamunkey. - The Spirit of Slavery in the Army.

- Washington Jail and its Inmates. - Close of the Year. - The Opinions of a Loyal Tennesseean. - General Buell and His Policy. - General Schofield and the Guerillas.

- Radical Sentiments of the Army. - Introduction to General Grant.

- Captain Porter and the Essex. - His Challenge to Captain Montgomery. - Discussion of the Negro Question.

- Scenes at the Phenix Hotel. - Tomb of Henry Clay. - Clay's Opinion of Abolitionists.

- How a Presbyterian Minister would conduct the War. - Buell's Right Wing. - Trip down the Ohio. - Passengers on Board the Grey Eagle.

- The People of Owensborough. - Scenes on the Steamer. THE OPENING OF THE CAMPAIGN IN TENNESSEE. - Commodore Foote's Account of the Fight.

- His Care for the Wounded. - His Preaching on Sunday. - Capture of Fort Donelson.

- Movement of the Troops. - The Appearance of the Rebels. - The Town of Dover.

- Scenes in the Rebel Lines. - The formal Surrender of the Fort.

- Appearance of Buckner and Grant. - Rebel Officers on the Rampage. - Commodore Foote's Intentions. - His Plans frustrated by Halleck.

- Nullification of Order No. - Bombardment of Island No. - Colonel Bissell's Canal.

- Passage of Transports to New Madrid. - Running past the Batteries.

FROM HARPER'S FERRY TO FREDERICKSBURG. - Expectations of the People. - Bombardment of the City.

- Positions of the Troops. - Burnside's Orders to Franklin. - Movement of the Army. - Attack on the Left.

- Jackson's Line broken. - Attack on the Right. - General Howard and the Secessionists.

- Sanitary and Christian Commissions. - Religion in the Army. - Reorganization of the Army.

- First Bombardment of Sumter. - Visit to the Fleet. - Damage to the Fort. - Hooker on the Watch.

- Resignation of General Hooker. - Feelings of the Soldiers. - Organization of the Army. - Patriotism of the People. - Bread for the Soldiers. - Geographical Features of the Place. - Beginning of the Fight. - General Howard's Account. - General Slocum at Two Taverns. - General Hancock's Arrival. - Color-Bearers of the Nineteenth Indiana. - Arrival of the Third Corps.

- General Meade on the Field. - Ride along the Lines. - Position of the Second Corps. - Sickles's Position at Noon. - Resistance of the Third Corps.

- Position of the Troops. - Scene at Meade's Head-Quarters. - Repulse of the Rebels. - Scenes along the Lines. - In the Rebel Lines. - Battle at Falling Waters. FROM THE RAPIDAN TO COLD HARBOR. - President Lincoln reviewing the Colored Troops. - The Army in Motion.

- Grant and Meade in Council. - Position of the Army.

- First Day's Fight. - Arrival of the Ninth Corps. - Song of the Wounded.

- Death of General Rice. - Attack of the Second Corps. - A Day in Fredericksburg. - Getting Straw for the Hospitals. - Movement to the North Anna. - Battle of Jericho Bridge. - A Night in a Cabin.

- McClellan at Cold Harbor and the Campaign of'62.- Grant's Operations. - The Planters and their Property. - The Day of Jubilee.

- Breaking up of Society. Comments of the Rebel Newspapers. - Opinions of the Soldiers.

- Prejudice against Colored Troops. - Hardships of the Campaign.

- His Plan for a Mine to destroy the Works before Petersburg. - Difficulties he encountered in constructing it.

- Battle at Deep Bottom. - Completion of the Mine. - Preparations for springing it. - Consternation of the Rebels. - Confusion of Union Troops. - Rebels return to their Guns. - Terrible Slaughter in the Crater. - Reasons for the Failure. - The Fortunes of the Confederacy. - Early's Movement down the Valley. - Breckenridge sent to reinforce him. - Arrival of Nineteenth Corps. - Advance of Rebels upon Washington. Review of Sherman's Campaign. - Jeff Davis's dislike of Johnston. - Davis's Speech to Hood's Army. - Sherman contemplates a Movement to Savannah. - Organization of Sherman's Army. - Comments of Rebel Press on his March to the Sea. - Complaints of Sherman's Inhumanity. - He is compared to Attila. - His Vindication of Himself. - Their Humanity to Union Refugees. - Destitution of the People. - Humanity of the People of the North. - Voyage of the Greyhound. - Responsibility of Rebel Officials. - Amiability of General Lee. Aunt Nellie and her Sister. - Burning of the Arsenal. - General Sherman's Order No. - Appearance of the Congregation. - Plans of the Freedmen.

- The Dead from Manassas. - The Gospel of Slavery.

- Poor Whites of Georgia. - Freedmen in Council in the Slave Market. - Expectation of the Rebels.

- His Army in Motion. - Howard's Advance to the Salkehatchie. - Hardee retires to Branchville. - Kilpatrick's Movement towards Augusta. - Sherman moves to Orangeburg. - Hampton's and Wheeler's Cavalry. - Burning of the City. - Sherman charges Hampton with kindling the Fire. - Bitterness of South-Carolinians against General Sherman. - Responsibility of the Rebel Government for Outrages. SOUTH CAROLINA BEFORE THE WAR.

The Part taken by the State in the Political Affairs of the Nation. - Assembling of the Legislature in 1860.- Remarks of W. - The Teachings of the Bible.

- The Province of History. - Women of South Carolina in Favor of Secession. Governor Pickens's Letter to President Buchanan. - Major Anderson In Sumter.

- Removal of the People. - Assertion of the Charleston _Courier_. - Blowing up of the Ironclads.

- Letters of the Slave-Traders. - Colonel Woodford in the Office of the _Courier_.

- A Yankee in his Bed. - Joy of the Colored People. - John Brown in Charleston.

- Humiliation of the Rebels. - How the People were cheated. - Grant's Letter to Sheridan.

- Great Men in Council. - Sheridan on the Move. - Lee's Diversion against the Ninth Corps. - A Look at the Opposing Forces.

- Lee's Line of Fortifications. - Grant feels like ending the Matter.

- Blowing up of the Rebel Ironclads. - President Lincoln and the Soldiers. - Lee's Message to Davis. - The last Slave Coffle. - Confederate Promises to Pay.

- Scenes of Sunday Night. - Flight of the Legislature. - General Ewell and the Mayor in regard to burning the City. - The Massacre at the Almshouse.

- Departure of the Rebel Troops. - Breckenridge taking a last Look of the City. - Major Stevens and the Fourth Massachusetts Cavalry. - Raising Flags on the Capitol. - The Yankees putting out the Flames. - Entrance of General Weitzel. - Taking a room at the Spottswood Hotel. - Scenes in the City on Monday. - General Devens's Orders. - Visit to the Capitol.

- President Lincoln's Arrival. - Walk to Jeff Davis's Mansion. - The President's Visit to Libby Prison. - Opinions of the People. - Colored Soldiers in the Service of the Rebels.

- An Abolitionist in Richmond. - A Newspaper Correspondent and a Rebel Officer. - Scenes of the Past. - Sympathies of Palmerston and Russell. - His Appointment as Financial Agent.

- Benjamin's Letter to Spence. - Slidell's Proposition for a Loan based on Cotton.

- French intrigue to sever Texas from the Confederacy. Slidell recommends D'Erlanger as a suitable Agent to negotiate the Loan. - D'Erlanger offers it to the Bankers of London. De Leon secures the Support of the Press. - Opening of the Correspondence. - D'Erlanger's Opinion of Mr. Spence's Letter to D'Erlanger. - Compliments of the Emperor to D'Erlanger on the Success of the Loan. - Jeff Davis a Repudiator.

- Wishes for a Second Loan. - D'Erlanger takes the Part of Shylock. - D'Erlanger helping Himself to Principal and Interest. The Retreat of Lee from Petersburg.

- Dejection of Rebel Soldiers. - Lee's Line of Retreat. - Grant ahead of him.

- Panic among the Rebel Troops. - Battle at Sailor's Creek.

- The Race toward Lynchburg. - Lee's last Council of War. - Correspondence between Lee and Grant.