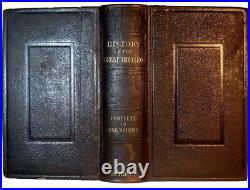 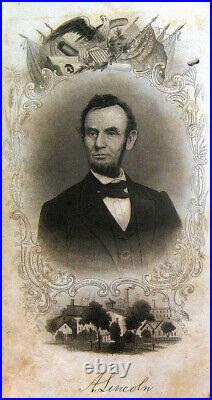 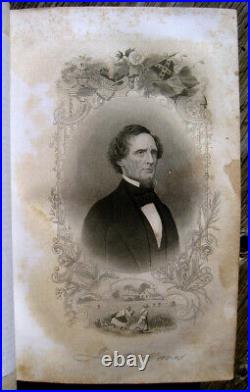 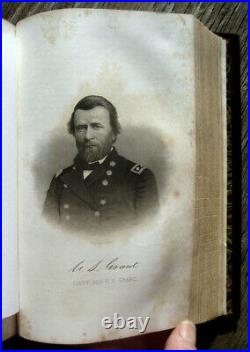 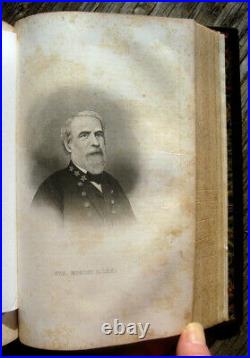 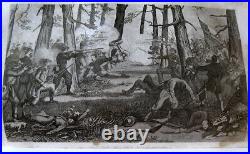 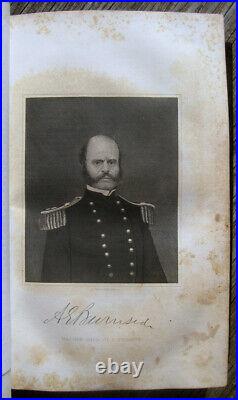 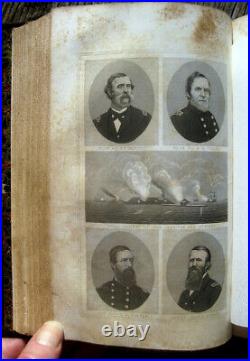 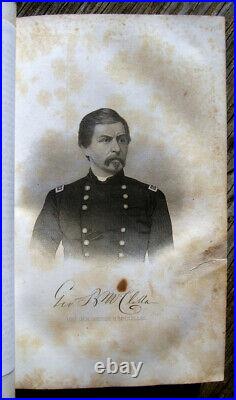 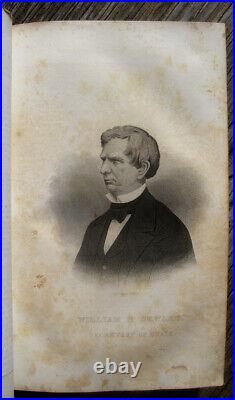 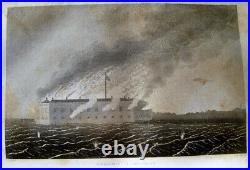 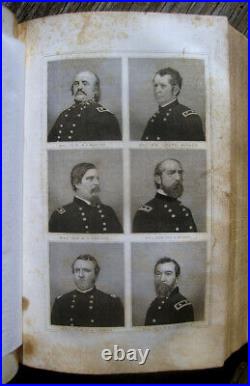 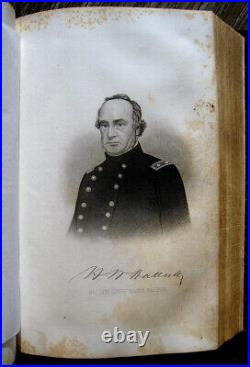 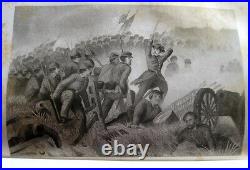 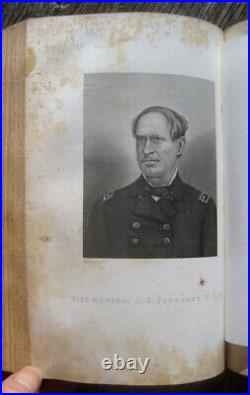 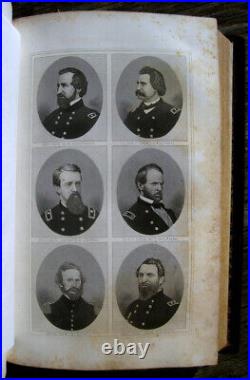 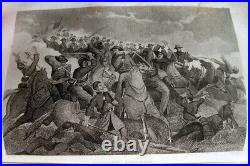 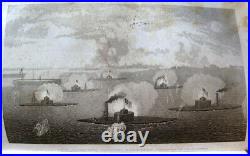 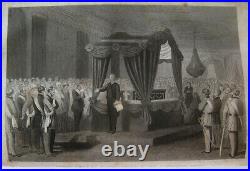 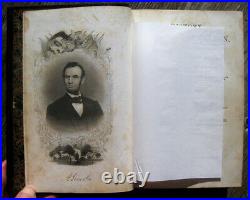 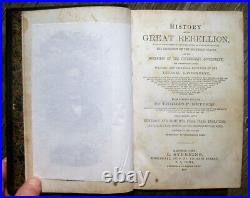 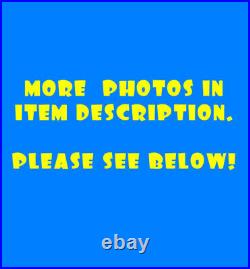 HISTORY OF THE GREAT REBELLION, From Its Commencement to Its Close, Giving an Account of Its Origin, The Secession of the Southern States, and the Formation of the Confederate Government, The Concentration of the Military and Financial Resources of the Federal Government, The Development of Its Vast Power, The Raising, Organizing, and Equipping of the Contending Armies and Navies; Lucid, Vivid and Accurate Descriptions of Battles and Bombardments, Sieges and Surrender of Forts, Captured Batteries, Etc Etc; The Immense Financial Resources and Comprehensive Measures of the Government, The Enthusiasm and Patriotic Contributions of the People, Together With Sketches of the Lives of All the Eminent Statesmen and Military and Naval Commanders, with a Full and Complete Index. 9" x 6" full leather binding with gilt title on spine.

Embellished with Numerous and Beautiful Steel Plate Engravings, and Valuable Maps, Showing All the Important Military Points. This rare 1866 volume has been expertly restored by a professional book conservator.

Text is clean and complete. General foxing and offset toning in vicinity of engraved plates. No torn, loose or missing pages. This is an antique mega-history of the Civil War, written even as the events of the Great Rebellion were still unfolding. Originally published as a two-volume set, this 1866 edition combines both volumes under a single cover.

It features numerous steel engraving illustrations, along with many full-page maps. The author writes in the Preface. In the following pages it has been attempted to give a succinct and authentic narrative of the war against the American Union. Our materials at present are like the direct evidence educed at a trial - the cross examination has not yet been had, Meanwhile, however, a work which shall refresh and re-enforce the memory, bewildered by the rapid march of events, and give a clear outline of what these wonderful four and a half years have brought forth.

Such the present volume assumes to be. It is confidently believed that no important civil or military event will be found to have been omitted from its pages. The sources of the writer's information have been, wherever obtainable, official documents, and particularly the reports of generals who have conducted active operations in the field, or whose position has enabled them to describe such operations with accuracy.

Where materials of this nature were not to be obtained, free use has been made of the voluminous and often graphic narratives of the army correspondents of the daily press - a branch of literature to which the war has given a surprising development, and which must be largely referred to by future historians. CHAPTER ONE: Secession determined upon by Southern Leaders Treachery of Cabinet Officers Division of the Democratic Party Election of Mr Lincoln The John Brown Raid "The Impending Crisis" and the Compendium Movement for Secession in the Cotton States. CHAPTER TWO: South Carolina Convention Ordinance of Secession and Declaration of Causes Resolutions for Convention of Seceded States Mississippi Convention Alabama Convention Florida Ordinance Seizure of Forts Georgia's Resolution in response to New York Ordinance of Secession Louisiana Convention Texas Convention Vote of the People General Houston Virginia Resolutions Ordinance of Secession Convention with the Confederacy Arkansas Secession defeated North Carolina Ordinance passed Tennessee Act of Independence Military League Maryland Resolutions Confederate Congress Constitution. CHAPTER THREE: Meeting of Congress. Resignation of Secretaries Cobb, Cass, Floyd, and Thompson.

Special Message of the President. Lincoln's Arrival at Washington.

Policy or the Government Charleston Harbor. Bombardment and Surrender of Fort Sumter.

CHAPTER FOUR: Effect of the Fall of Sumter Call for Seventy-five Thousand Troops, and Replies of States. Destruction of Property at Norfolk.

Effects of the Proclamation at the North. Baltimore Riot March Troops to Washington. CHAPTER SIX: Troops concentrated at Washington.

Battle of Wilson's Creek. Retreat of the Army under Sigel. Advance of Fremont Retreat of Price. Columbus, its Position and Strength.

CHAPTER FOURTEEN: Strength of the Navy. Propositions of the American Government Action of England and France. CHAPTER FIFTEEN: Improved Efficiency of the Navy. Port Royal The Fleet The Assault Troops Landed. Combat on the Mississippi Effectiveness of the Blockade.

Table of Guns in Service. The Retreat of the Enemy from Manassas.

The Object of Jackson's Raid Fremont's Movement Retreat of the Enemy. Formation of the Army of Virginia under Pope. CHAPTER TWENTY-FOUR: Continued Operations against Richmond.

Second Battle of Bull Bun. CHAPTER TWENTY-NINE: The Expedition of Burnside. Operations on the Southern Coast Siege of Fort Pulaski. Gold Notes at a Premium. Growth of Debt Immense Means.

Reorganisation of the Ohio Army by Rosecrans. CHAPTER THIRTY-EIGHT: Turn of the Tide of War. Renewal of Attempt upon Vicksburg. Passage of Batteries by the Fleet.

Defeat of Milroy at Winchester. Meade appointed to command the Army of the Potomac Battle of Gettysburg. CHAPTER FORTY-THREE: Lee's Retreat from Gettysburg.

Reconnoissance Kilpatrick's raid upon Richmond. CHAPTER FORTY-FIVE: Creation of the Office of Lieutenant-General.

Battle of Chickamauga The Two Generals. CHAPTER FORTY-SEVEN: Inaction of Bragg His Position. Rosecrans Recruiting Storms Hooker Arrives Grant Ordered up. Thomas In Command of Department Position of he Army.

Siege of Knoxvllle Burnside Hard Pressed. CHAPTER FORTY-EIGHT: Operations against Charleston Arrival of Monitors. Capture of the Atlanta General Gillmore In Command. Siege and Reduction of Fort Wagner. CHAPTER FORTY-NINE: Advance on Richmond. Crossing of the Rapidan Routes of Corps. The Enemy Attempts a Flanking Movement. Advance of Hancock on the 6th.

Attack on the Union Right. Results of the Two Days' Fighting. CHAPTER FIFTY: Movement upon Spottsylvania. The Enemy on the Alert Attack of May 10th. Grant to Fight It out on that Line.

Assault bv the Second Corps on May 12th. Large Captures of Prisoners and Guns. Sheridan at the James River. CHAPTER FIFTY-ONE: Retrograde Movement of the Enemy. Bad Condition of the Roads. Union Movement to the Left. Irruption on the Rear Reposed. Grant Crossing the North Anna.

Impregnable Position of the Enemy. North Anna Recrossed, and Movement to the Left continued. CHAPTER FIFTY-TWO: Original Plan of Campaign.

Butler's Expedition up the James. Repulse of the Union Forces.

New flank Movement determined upon. Crossing of the James and Junction with Butler. CHAPTER FIFTY-FOUR: Advance on Petersburg. Assault and Capture of Earthworks and Guns. Assault of Saturday, June 18th.

CHAPTER FIFTY-FIVE: Relative Strength of Armies. Grant Moves against the Railroad Connections of Richmond Combat of June 21st Repulsed the 23d. Movement of Milson and Kautz on the Danville Road. Five Hundred Thousand Men called out. Explosion of the Mine In Front of Petersburg. CHAPTER FIFTY-SIX: Sigel's Movement in the Valley. Hunter Supersedes Sigel, and Defeats the Rebels near Staunton. Early sent to the Valley. Retreat of Hunter through Western Virginia. Advance of Early down the Valley and Invasion of Maryland. Arrival of Sixth Corps and Retreat of Early. Various Encounters in the Valley. CHAPTER FIFTY-SEVEN: Dutch Gap Canal. Movement North of the James. Expedition of the Fifth Corps to the Weldon Road.

Attack by Hill Severe Fighting near Reams's Station. Renewal of Movement North of the James and Capture of Fort Harrison. Further Operations on the Weldon Railroad. CHAPTER FIFTY-EIGHT: Operations In Tennessee. Sherman's Raid Through Mississippi.

Failure of Smith's Co-operative Movement Invasion of Western Tennessee and Kentucky by Forrest Massacre at Fort Pillow. CHAPTER FIFTY-NINE: Co-operative Movement on Atlanta. Size and Organization of the Union and Rebel Armies Commencement of the Campaign by Sherman. Evacuation of Dalton by Johnston. Battle of Resaca and retreat of the Rebels. Operations at Dallas and Kenesaw. Rebels Flanked and Driven Across the Chattahoochee.

CHAPTER SIXTY: The New Position of the Enemy. Johnston again Turned and Pushed Back upon Atlanta.

Battles of July 20th and 22d. Cavalry raids of Stoneman and McCook. Defeat and Capture of Stoneman. Prolongation of the Union Right Wing. Changes of Commanders in Sherman's Army.

Capture of Fort De Russey. Retreat of the Army Repulse of the Enemy at Pleasant Hill. Operations of the Fleet The Dam at Alexandria.

Arrival of the Army and Fleet in the Mississippi Co-operative Movement of Steele in Arkansas. CHAPTER SIXTY-THREE: War in Missouri. Successful Campaign of General Steele in Arkansas. General Grant Sacking of Lawrence by Quantrell Price's Last Invasion of Missouri. His Disastrous Defeat and Retreat into Arkansas. Landing on Dauphine Island Order of Battle. CHAPTER SIXTY-FIVE: Expedition to Florida. Battle of Olustee, and Retreat of the Union Army. Her Fight with Union Gunboats. Combat between the K Kearsarge and Alabama. Capture of the Florida and Georgia. CHAPTER SIXTY-SIX: Depopulation of Atlanta. Correspondence between General Sherman and Mayor Calhoun. Hood Severs Sherman's Communications. Marches into Alabama and Enters Tennessee. Sherman's New Plan of Campaign. Battles of December 14th and 16th before Nashville.

Retreat of Hood Into Alabama, Close of the Campaign. CHAPTER SIXTY-SEVEN: Sheridan in Command of the Middle Military Division. Battles of Opequan Creek and Fisher's Hill. Rout and Retreat of the Rebels Their New Position at Brown's Gap. CHAPTER SIXTY-EIGHT: Position of Armies.

Opportune Arrival of Sheridan Disastrous Defeat of the Enemy. Sheridan's Troops Leave for the Potomac.

Organisation and Strength of the Peace Party. Political Reaction in Favor of the Administration.

President's Plan of Reconstruction. Amendment to the Constitution Presidential Canvass of 1864. Conventions at Baltimore and Chicago.

Appeal to the People of Georgia. Communicates with the Fleet Fort McAllister. CHAPTER SEVENTY-TWO: Affairs at Petersburg. Renewed Attempt to Flank the Rebel right Battle at Hatcher's Run. Fighting on the North Side of the James. Importance of Sherman's Operations. Second Attack on Fort Fisher. Capture of Fort and Garrison.

CHAPTER SEVENTY-FOUR: General Sherman at Savannah. Conflagration in Columbia and Its Origin. Lee Placed In Chief Command of the Rebel Armies. Goldsboro Junction of Three Union Armies. Objective of the Campaign Gained.

His Surrender to Grant End of Campaign. CHAPTER SEVENTY-SIX: Raids In Kentucky and East Tennessee.

Defeat and Death of Morgan. Successes of Stoneman and Burbridge. Destruction of Works at Salt villi. Negotiations between Sherman and Johnston.

Agreement for Surrender by Johnston disavowed at Washington. Wilson's Great Raid in Alabama and Georgia. Capture of Selma, Montgomery, and Macon.

Cruel Treatment by Rebels of Union Prisoners. Execution of Beall and Kennedy. Attempts to Fire American Cities and Introduce Pestilence. CHAPTER SEVENTY-SEVEN: Peace Negotiations at Fortress Monroe. Rejoicings at the Prospect of Pence.

Booth, the Murderer, Pursued and Shot. Trial and Execution of his Accomplices. Inauguration of Andrew Johnson as President. Plan for Reconstruction Pursuit and Capture of Davis.

Capitulation of Generals Taylor and Kirby Smith. Termination of the War and Disbanding of the Armies.

Please be sure to add me to your List of Favorite Sellers. Don't miss out on any of my latest listings.

When you prepare your listings you generally should use only material text, photographs, etc. And trademarks/names that you created or own yourself or licensed from the owners. Item description text; lists of contents, lists of illustrations/photos; scanned images, etc.