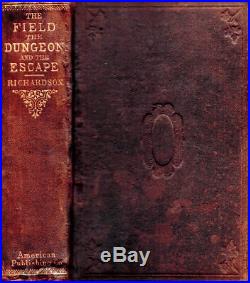 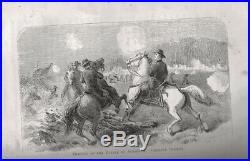 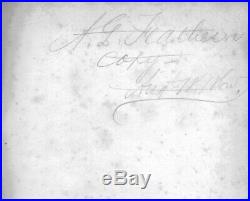 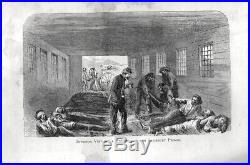 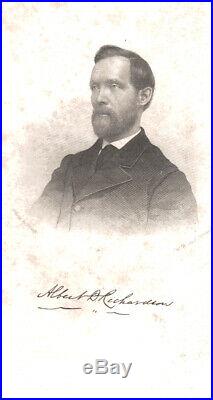 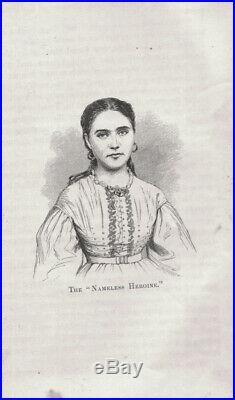 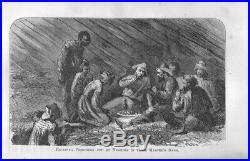 From 1865, the last year of the Civil War, a very good copy of a Civil War classic, The Secret Service, The Field, the Dungeon and the Escape, by Albert D. Richardson, the war correspondent of the New York Tribune. Published by American Publishing Co. A gripping narrative on the author's escape from a Confederate prison camp, complete with help from escaped slaves and the Nameless Heroine. Bound in period cloth, gilt titles, 512 pages. Note the 1865 pencil calligraphy signature, A. Feather's Copy, or something similar. See below for more on author Richardson, a remarkable individual who should be more famous than Mark Twain. Albert Deane Richardson (October 6, 1833 - December 2, 1869) was a well-known American journalist, Union spy, and author. Among his works is his noted biography of Ulysses S. Richardson was shot on two separate occasions, the second time fatally, by a jealous husband of the women Richardson was in love with. Born in Franklin, Massachusetts, October 6, 1833. Obtained first job with newspaper, Pittsburgh Commercial Journal, 1851.

Richardson and Browne were imprisoned for 20 months in seven different prisons, confined successively at Vicksburg, Jackson, Atlanta, Richmond, and Salisbury, North Carolina, prisons. On December 18, 1864, after 20 months of imprisonment, he escaped from Salisbury, along with Browne.

They traveled together more than 400 miles through hostile country, and reached the Union lines on January 14, 1865. His list of Union soldiers who died at Salisbury, published in the Tribune, is the only authentic account of their fate. Richardson was one of the best known reporters of his age, due to his abilities as a writer and his services (during the American Civil War) as a Union spy. Unfortunately his reputation is recalled as the victim of a homicide that gained considerable notoriety in the Gilded Age. Richardson's wife and daughter had died during the war, and he subsequently met Abby Sage McFarland, an actress married to one Daniel McFarland.

McFarland claimed to be a major businessman and politician, but basically he was a violent husband and alcoholic with connections with Tammany Hall. Richardson and Abby Sage McFarland lived together, their friends and acquaintances (including Horace Greeley) understanding Richardson was protecting the woman he loved while she was trying to get a divorce, something that was not well received generally by the public in the 1860s. Sage McFarland and Richardson got advice from his friend Vice President Schuyler Colfax on using Indiana divorce laws for the fastest results.

McFarland shot and wounded Richardson in March 1867, but the latter recovered. But on November 25, 1869 McFarland shot Richardson in the offices of the New York Tribune in front of the night clerk Daniel Frohman (later a famous Broadway producer). Richarson was fatally shot, but lived for over a week. By this time Abby Sage had gotten her divorce, and Richardson married her at a special bedside marriage performed by the Rev. The trial was a farce, with Tammany connections and dislike for the people who worked at the Tribune being used fairly shamelessly to protect McFarland. He was shown by his defenders to be a defender of the home and hearth against a seducer, as Harry K. Thaw would be shown to be in his 1907 trial for the murder of Stanford White. McFarland was acquitted among cheering crowds.

But his ex-wife did not return to him and spent the rest of her life as Abby Richardson, working in the theater as play reader. In the words of the criminal historian Edmund Pearson, it did not take him long to drink himself to death.

Looked at today the story has a modern ring because of Abby being the victim of domestic violence. Yet even sixty years later the historian Claude G. Bowers in his partisan history The Tragic Era (1929) showed a mean comfort in the fate of Richardson, and the tarnishing of Beecher, Colfax, and Greeley by the scandal (as though they were responsible, not McFarland). Journalist Leander Richardson was the son of Albert and Mary Louise. The Secret Service, the Field, the Dungeon, and the Escape.

American Publishing Company; Hartford, CT. Beyond the Mississippi, From the Great River to the Great Ocean. A Personal History of Ulysses S Grant.

The item "1865 CIVIL WAR ESCAPE CONFEDERATE PRISON CAPTAIN FEATHER'S COPY PENNSYLVANIA 1ST" is in sale since Wednesday, April 29, 2020. This item is in the category "Books\Antiquarian & Collectible". The seller is "antiquebookcentral" and is located in Fernandina Beach, Florida. This item can be shipped worldwide.