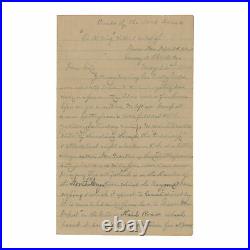 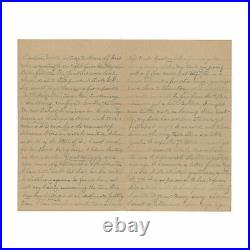 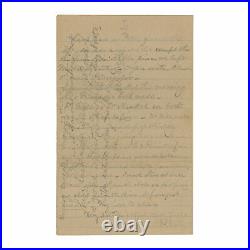 Kagey had only recently been appointed the new hospital steward for the 25th Virginia Infantry when he wrote this letter from the banks of the North Anna River in May 1864. His friend Abraham Miller was the regimental surgeon and had helped get Kagey the appointment only the month before (he had attended medical school at the University of Virginia in the fall of 1863). Kagey had previously served in the Danville Light Artillery and participated in most of the major battles up to that point, but nothing could have prepared him for May 1864, with the severe test at the Battle of the Wilderness followed by utter devastation at the Battle of Spotsylvania Court House. Much of Confederate General Edward Johnsons Division, of which the 25th Virginia was a part, was captured in the Union Armys attack on the Mule Shoe salient at Spotsylvania on May 12. The ramifications of that event linger in this letter, written ten days after, as Kagey and his comrades crossed over the North Anna River to take up defensive positions on the opposite bank. Wagons &c are crossing, Kagey wrote, and I expect to wade directly. Kagey correctly believed that Ewell intends to head off Grant, adding that the Yankees were badly whipped up to that point. Lee wants to get them in as far as possible. He mentioned reinforcements arriving from Generals George E. Breckinridge, and John Bell Hood, and speculated that the remnant of Gen. Johnsons Division will be united with Breckinridges troops. Another giant struggle will soon come off between this and Richmond.

I have little doubt but that Gen. Lee will be victorious again. So far we have not lost very heavily considering the time there has been fighting, and such desperate fighting too. I have marched all the time since we left winter quarters and thus far have gotten along pretty well. Kagey mentioned that his boots were giving out and considers that he might run little risk in having [another pair] sent.

He also considered having his horse sent, but decided it might be as well not to have him on the way till there is a little quiet. I hope the Yankees did not get him. Miller and another friend, Dr. Henkel of the 37th Virginia, are both well & safe so far, he wrote. He also wrote that William Rices Battery were safe, possibly referring to William D.

Rice of the Virginia Louisa Morris Battery, which was wiped out at the Mule Shoe. Kagey closed the letter with the following, added on May 24: We are at Hanover Junction. Send my horse if a good opportunity offers & my boots.

The entire army is here. The letter was written on four pages of a 5 x 8 bifolum stationery sheet. Excellent condition with minor toning. Creased at the original mailing folds.

Bank of the North Anna. On the Wing within 3 miles of Beaver Dam Depot Va C. Earlys Corps were ordered to prepare to move.

Everything was ready in a few minutes but we waited five hours before all got in motion. We left our camp at or near Spotsylvania battlefield at 4 O. We marched in all sorts of directions through this Wilderness & stayed last night about one O. It is said to be 3 miles from here to Beaver Dam Depot on the Central Rail Road, which point it seems we are destined for at present.

I suppose Ewell intends to head off Grant, who is moving to our right from Spotsylvania battlefield. The Yankees were badly whipped up to that point.

Breckinridge landed at Chesterfield Depot with 3500 men yesterday, & it is said his & the remnant of Gen. Johnsons Division will be united. I have no doubt of the truth of it.

I cant vouch for Gen. I believe his troops are here. My boots are giving out, & if you could put my others up in a small box with a few other things you might send them to Staunton & as it is probable we will now not be far from the R. When we get a little settled I might run little risk in having them sent. If my horse has not been started yet perhaps it might be as well not to have him on the way till there is a little quiet.

I would like to know how the one I left with the Dr. I received a letter from my friend A. Henkel yesterday written the 7th. I was pleased to hear from him. Will write to him first opportunity.

I write to you & Mary every chance. I sent a letter out a few days ago.

Have had no letter from either of you nor anyone else except the one from friend Abe Siner. I saw Lester Henkel this evening. He & Lewis are both well. Henkel are both well & safe so far. William Rices Battery were safe yesterday morning & are getting along about as us all. I would not be surprised if we all of this Corps are ordered to Hanover Junction. I would like to have 2 pairs cotton drawers. I need them at once. I must close as our forces are about across the River. Very Hastily & affectionately your Bro. Monday morning May 24 1864.

We are at Hanover Junction. Please see my other items for more interesting Civil War letters, documents, and images. The item "1864 Confederate Civil War Letter 25th VA -Gen. Lee will be victorious again" is in sale since Thursday, November 12, 2020. This item is in the category "Collectibles\Militaria\Civil War (1861-65)\Original Period Items\Correspondence, Mail".