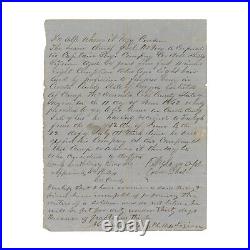 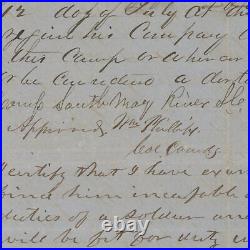 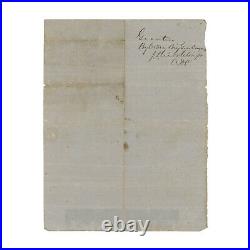 This 1862 pass authorized Corporal Joel W. Berry of the Cavalry Battalion of Phillips' Legion to go to his home in Coweta County, State of Geo. He having received a Furlough from the day of 12 day of June to the 12 day of July, at which time he will rejoin his Company at this Camp or wherever it then may be, or be considered a deserter. It is signed by Colonel William Phillips (namesake of the Legion), Captain Robert L. Long (Berry's company commander), and Surgeon A. It is briefly docketed on the reverse as "granted" and signed on behalf of General Thomas Drayton by a staff officer whose last name appears to be Middleton or Littleton. Phillips' Legion was one of several "Legions" formed at the beginning of the Civil War.

It consisted of several infantry companies along with a cavalry battalion-all meant to fight together as one unit. Phillips' Legion served together in South Carolina until just after this pass was written. In July 1862 the Legion would be ordered north to join Robert E.

Lee's Army of Northern Virginia. At that time the infantry and cavalry contingents were placed in different brigades and were never reunited. The dates on this document are a bit of a mystery.

It is certainly from the spring of 1862 since that's the time Phillips' Legion was at the South May River camp in coastal South Carolina, where Colonel Phillips signed his approval. Yet it states that Berry was enlisted at Camp McDonald in Georgia on June 11, 1862, and that his furlough was valid from June 12 through July 12. It seems unlikely Berry could be enlisted in Georgia on the 11th, and then furloughed from the May River camp on the 12th.

It's more likely he was enlisted when Phillips' Legion was forming at Camp McDonald in June 1861, and that the staff officer writing up the pass was mistaken when recording the year. The pass was written on a sheet of blue paper measuring about 6 1/4" x 8". It is in very good condition with light foxing and toning. Creased at the original folds.

The full transcript is below. To all whom it may concern. The bearer thereof, Joel W. Berry, a Corporal in Captain Long's Company, Cav.

Phillips' Legion, aged 24 years, five foot 11 inches, light complexion, blue eyes, light hair, and by profession a farmer, born in Coweta County, State of Georgia, enlisted at Camp McDonald, Cobb County, State of Georgia, on the 11 day of June, 1862, is hereby permitted to go to his home in Coweta County, State of Geo. Camp South May River, S. Please see my other items for more interesting Civil War letters, documents, and images. This item is in the category "Collectibles\Militaria\Civil War (1861-65)\Original Period Items\Correspondence, Mail". The seller is "iron-horse-sales" and is located in this country: US.