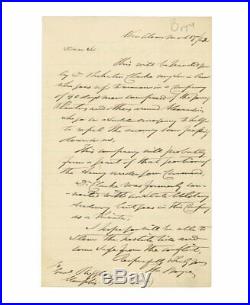 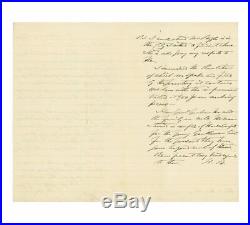 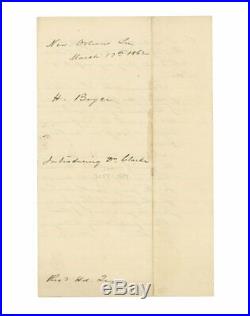 An interesting March 1862 letter written and signed by Judge Henry Boyce of Alexandria, Louisiana, to Confederate General Daniel Ruggles in Memphis, just three weeks before the Battle of Shiloh. Boyce had been the U.

District Court Judge for the Western District of Louisiana since being appointed by President Zachary Taylor in 1849, but resigned in 1861 shortly after Louisiana's secession vote. According to the letter, it was hand delivered to General Ruggles by Judge Boyces son-in-law, Dr. Powhatan Clarke , who was on his way to Memphis in a Company of 90 days men composed of the Young Planters and others around Alexandria who go in a sudden emergency to help to repel the enemy now drawing down on us. Clarkes company was the Alexandria Rifles , which became Company L of the Crescent Regiment. Boyce added that the Company was likely to join the division forming under Ruggles command, adding that Dr. Clarke was formerly connected with the State Military Academy but goes in this Company as a Private. This refers to the Louisiana State Seminary of Learning & Military Academy, which would be renamed Louisiana State University in 1870. In a relatively lengthy postscript, Boyce mentioned another figure from LSU history, George Mason Graham. Three weeks after the letter was written, the Crescent Regiment met the Yankees at Shiloh, where they were engaged in the area of the Hornets Nest and took a part in accepting the surrender of Prentisss troops. Following the expiration of the regiments 90-day term, Dr. Powhatan Clarke continued his service with the 10th Mississippi Cavalry, eventually joining the staff of General Simon B. The letter was written on two pages of a four-page bifolium sheet measuring about 5 x 8. It is docketed on the fourth page.

It is in excellent condition with light toning. New Orleans March 17th / 62.

This will be handed you by Dr. Powhatan Clarke, my son-in-law who goes up tomorrow in a Company of 90 days men composed of the Young Planters and others around Alexandria who go in a sudden emergency to help to repel the enemy now drawing down on us. This company will probably form a part of that portion of the Army under your command.

I hope you will be able to stem the hostile tide and come safe from the conflict. Ruggles is in the City. I intend to find out where she is and pay my respects to her.

He and the family are well. He mentioned a couple of [illegible word] for the young Gentlemen, but for the present they have gone beyond reach of them. Please present my kind regards to them.

This item is in the category "Collectibles\Militaria\Civil War (1861-65)\Original Period Items\Correspondence, Mail". The seller is "iron-horse-sales" and is located in Champaign, Illinois.